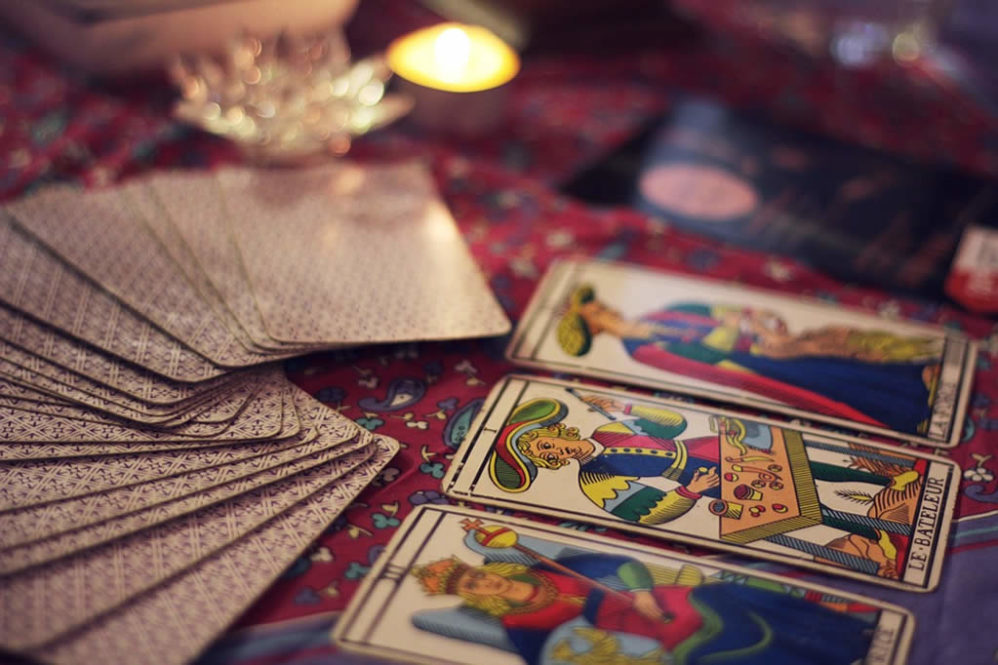 From being a teenager my mother and I visited Mediums. We went to people’s houses for ‘sittings’ to contact the dead and receive messages. Mum wasn’t as enthralled as I was, and, unlike my mum, I became more deeply involved in these practices.

What I was most attracted to was the Tarot Cards. I quickly learnt how to read them, and started reading for family and friends. To me, this was just a hobby that me, my friends and my family could enjoy.

Then I began to go to development circles and became enthralled. I went out and bought heaps of different books on self-development, meditations, chakra reading, channeling, etc. I studied them earnestly, eager to develop.

We began to have ‘sittings’ at our house, where we would invite several friends or family members to participate in the group. Although there were some happenings that were quite bizarre, I thought it was fine as no harm came to me whatsoever.  Even though I’d read warnings in Occult books about receiving a bad spirit, I still didn’t think it was dangerous, as the advice was just to simply ask for it to leave, and for a better one to take it’s place.  Everyone who took part in such activities seemed to come to no harm at all, so we continued…

Freed from the Occult

In 2006 I was invited to an Alpha course to learn about Christianity.  I reluctantly attended, and even sat near to the door so that I could ‘escape’. There was no way these ‘religious nuts’ were getting me going to church!

But very soon, the Bible quotes spoke to me.  The first one which really stood out was ‘I am the way, the truth and the life’ – Something struck a chord, and I just felt that there was truth in this saying. I started to look forward to our weekly sessions, and couldn’t wait to hear more Bible quotes and learn about Jesus.

I began to realize that these people were ‘normal’, and very loving. They still welcomed me even though I’d not felt very friendly towards them when I first arrived.  I didn’t want  the course to finish, so I attended another one and went through it all again!  I then began to attend a Methodist and a Pentecostal church.

Two years later, in the Spring of 2008, I became a member of my church.  However, I still had my Tarot Cards, still thinking there was no harm in them whatsoever.  It was my friend who advised me to get rid of them, telling me if I call myself a Christian, I shouldn’t be dabbling with those things.

After getting rid of them, there were several strange happenings. I realized the cards had actually connected me with ‘something’, as I started to feel a presence that kept coming to me almost weekly. I got used to it being around, I wasn’t frightened at all. I couldn’t determine who it was, just a definite energy, in physical terms I guess I could describe it as being aware of a small area of ‘fog’.

At first its presence made me feel calm and I became familiar with its vibration. As the weeks went by, it became stronger, and in its presence I could feel it’s energy blending more with mine, my body felt quite heavy.

The final time was the strongest, in August. It was at Holy Communion at Church. I was in the kitchen filling up the thimbles for Communion. I felt its presence very strongly, even though the place was busy. Nobody else seemed aware of it. As I walked to the front of the church to place the Communion thimbles at the table, there was the familiar feeling of it blending with me. I sat down and I could hardly move out of the chair, my body was so heavy. Someone came to ask me to serve cups of tea after the service; I immediately answered, “I’d love to” (normally I would have hesitated, as I am quite a shy person). But when I answered it felt like it wasn’t quite me controlling my voice, the words just came.

As the service began and everyone started to sing, I felt the presence beginning to fade.  I was also then able to stand and sing, and the presence quickly faded away.  I realized afterwards this was the beginning of something wanting to take possession of my faculties; something evil forcing me into trance against my will.

Over the next few weeks, I realized that it had decided to leave me alone, and it has never been back – thank goodness! I can only assume it was because I was in the presence of Jesus in that Holy Communion Service and it fled. What more proof do we need of Jesus saving us! Jesus said, “For where two or three come together in my name, there I am with them” (Mathew 18:20). There was a whole congregation there singing to him! There was definitely something in the church that day that got rid of this spirit. That is absolutely AMAZING! Spirits flee in his presence!

I remember walking to work in the morning and taking my Occult books with me to throw them away in a waste bin at the top of the street, I eventually got rid of them all.  I repeated the Lord’s Prayer under my breath all the way to work, for many days afterwards.

The Church of England employs at least one Exorcist in every Diocese in the country.  I renounced my involvement with the Occult with the Exorcist in my area. Knelt before the cross, I was anointed with Holy oil blessed by the Archbishop. People laid hands on me and prayed as I read aloud my renouncement.  To say sorry to Jesus was very special, and I’m so glad I did this.

People who are into any form of Occult practices and think it is safe are nice, well-meaning people, but don’t know they are deceived victims of Satan. You think you are fine, that there’s nothing to worry about… until you try to turn away from it. Then Satan’s demons will show their true colours, start to harass you and want to keep a hold on your soul. These spirits are demonic, and want to destroy your life.

God is the protector of our souls.

‘And no wonder, for Satan himself masquerades as an angel of light. It is not surprising, then, if his servants masquerade as servants of righteousness. Their end will be what their actions deserve’. . . . . 2 Corinthians 11:14 – 15

Are you caught up with the Occult? Would you, like Tina, want to give your life to Jesus Christ and be set free? You can do it right now by sincerely praying this prayer to Him.

This is where it starts.  But don’t stop here.

What is a Spirit Filled Life?
How can I live a Spirit-Filled Life?
When Confusion Prevails
Share this: