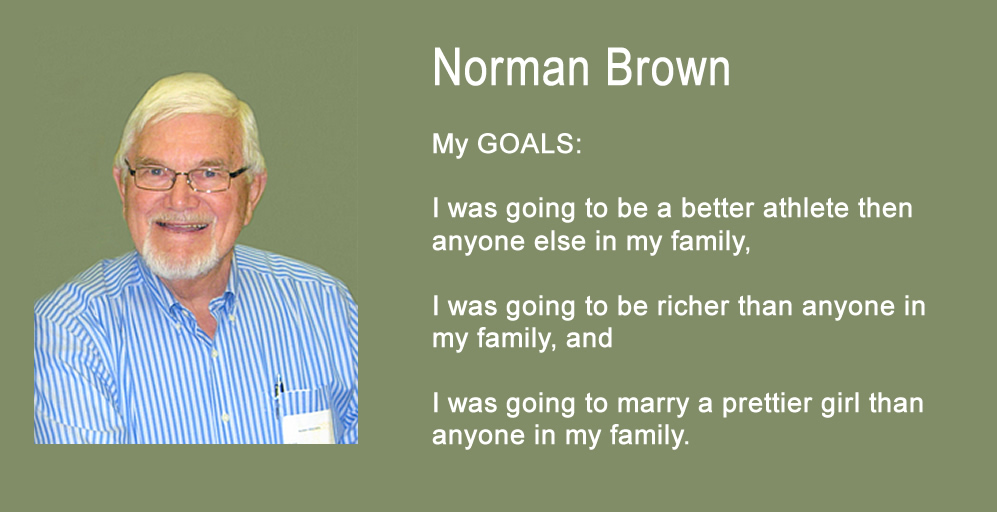 The plane was three hours into its international flight when the pilot came on the intercom with the following announcement:

“Ladies and gentlemen, don’t be alarmed, but I have some bad news as well as some good news for you. The bad news is that our navigational equipment is malfunctioning and we have no way of knowing where we are. The good news is that we have a strong tail wind and we’re making excellent time.”

That story describes the first part of my life. I was always in a hurry to get to the next level. Being the second youngest in a family of 10 boys and two girls, I was constantly in competition with my older brothers. Sports were a very important part of our family life and I was determined to be the best. All my spare time was spent playing or practicing.

I determined at an early age that I didn’t want to spend my life in poverty. I had three basic goals that I thought represented success for the future and respect from my family:

Later I realized that to accomplish my goals I’d need to get an education.

Selfish and Lonely
As a youth I poured all my energy into attaining the first goal. I thought that by achieving a high level of competence I would gain respect and people would like me. Instead I became obsessed and obnoxious and drove people away. Consequently I was very lonely. No one wanted to be friends with someone that had to have things his way. Many times I would embark on a self-improvement plan; however my selfish attitude would quickly undermine any progress I had made. Increasingly I became more isolated and lonely.

Many of the activities in our rural community revolved around the local church. I had attended church and Sunday school all my life, although I must admit, as I grew older I attended out of habit and not for the spiritual lessons to be learned. So when my mother asked me to go with her to hear a special speaker, I went.

As I settled in to endure another evening of boredom, my attention was captured by the speaker’s attitude and enthusiasm for what he had to share. He quoted a verse from the Bible that I had memorized in Sunday school:

“For God so loved the world that He gave His one and only Son, that whoever believes in Him shall not perish but have eternal life” (John 3:16).

Unconditional Love
His first comment was that God loved each person unconditionally. He said that God didn’t love us more or less for what we had done. I wanted to be loved. (As a matter of fact, I’ve never met a person that doesn’t want to experience love.) I listened with great interest as he talked about how we could experience God’s love in our everyday life. Night after night I went back to hear more. Secretly I wished I had that kind of relationship.

The speaker’s custom was to stand at the exit and talk to people as they left. Each evening I would wait for him to engage someone in conversation so I wouldn’t have to talk to him. Throughout the week I had the feeling that he knew all about me and was addressing my problems but I was too proud to admit that I had problems I couldn’t handle. You see, it was always the other people that had the problems!

The last evening I waited again for him to speak to someone so I could leave unnoticed. He must have been aware of that because at the exact moment that I tried to brush by him, he stepped in front of me and offered to shake my hand. As I took his hand he looked me in the eyes and asked if I had ever begun a personal relationship with God the way he had explained it. I quickly mumbled that I had (an outright lie) and then headed for the dark outdoors.

Pride Stand in the Way
The struggle had begun the very first evening. I liked what he had to say and secretly wished that I had a relationship with God. But then I would think about what people would say: “Norman Brown has become a religious fanatic.” And so the struggle continued.

As I went home that evening and thought about the events of the week and what I had heard, I desperately wanted to experience that kind of love, but my pride and personal reputation stood in the way. I couldn’t sleep because of the struggle that was raging in me. Finally, around two in the morning, I got up and looked out my window. It was a bright clear night in February. The stars were out and the moon was full. I looked up at the stars and began talking to God. Basically I said,

“God if what this man has been saying all week is true, then I invite you to come into my life and make me into the kind of person you want me to be. I’ve tried so many times to change myself and failed.”

Deep, Satisfying Peace
Something happened that night. As I climbed back under the blankets, a deep, satisfying peace came over me that I had not experienced before. I felt clean inside and out. I slept the sleep of a baby and awoke early the next morning with excitement and anticipation. I jumped out of bed and headed downstairs to tell my mother about the new me, but something happened.

When mother saw me coming downstairs without a wake-up call (a complete departure from my normal habits) she asked why I was up so early. Here was my opportunity to tell the one person who would be overjoyed with this great news. After all, she had prayed for me every day of my life. At that moment something came over me and I thought of the saying: “Actions speak louder than words.” So instead of sharing this great news with her I mumbled something about getting an early start on my chores. What a mistake!

For more than three years I kept “my secret.” I tried to change my life and habits, without much success I might add. Today I know why. The Bible tells us,

Satisfying Change
When I finally revealed my “secret,” changes began to take place. I began to see other people not as competition but as team players. I was able to encourage others and begin building friendships. I was still motivated to succeed, but not at the expense of others. I began to channel my drive into positive influences rather than using people for my own advancement.

Am I perfect? No! Do I still make mistakes? Absolutely! But now, when I become aware of an attitude or action that is hurtful to others or plain selfish, I take it to God and ask Him to help me deal with it – and He never lets me down!

I did marry that beautiful woman that I had dreamed about. After five and a half years of marriage our first child was born – a daughter. I was ecstatic! The second day we were informed that she was very sick and would likely not live. For the next three weeks, she was in intensive care and confined to an incubator.

My joy turned to anger toward God. How could God do something like that to me? In my anger I lashed out at God. What He revealed to me is that my pride in being a self-made man was just that – pride. He was in control. Over a period of time, we discovered that our daughter had cerebral palsy. God has used her to teach me patience, compassion, love and understanding. I can thank God every day for our daughter. She is a special gift from God.

Over the years I have encountered many opportunities to test God’s faithfulness. I studied to become a teacher and after a few years was promoted to school principal. Time after time, I needed to turn to God for wisdom in my decision making. Often God would use the circumstances of a special student to remind me of my dependence upon Him.

If you would like to have a personal relationship with God through Jesus Christ, you can say this prayer:

A Male Mentor’s Story – Norman Brown talks about his experience with mentoring. 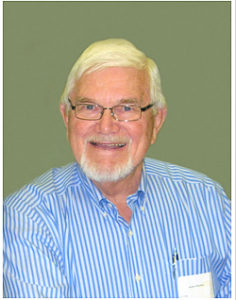 Norman Brown grew up in Manitoba, Canada and then entered the teaching profession. After teaching in Manitoba for several years they moved to British Columbia where Norman took the position of principal until 1974 when they joined the Leadership Ministries with Campus Crusade for Christ, now Power to Change.  They have traveled to Russia, Ukraine, Mexico Paraguay, Venezuela and Bolivia to work with local church and business leaders to help them reach their sphere of influence with the Gospel of Jesus Christ. The two main focuses: train people how to use the JESUS film and the Four Spiritual Laws .

Norman went home to be with the Lord on August 18th. He was a true friend and excellent mentor with Thoughts About God for many years.