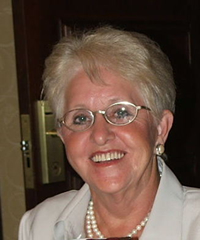 Katherine was born in Bassano, Alberta, Canada and lived the first 9 years of her life in Rosemary, Alberta.  From there, her family moved to Abbotsford, BC and lived on a 64 acre dairy farm until she graduated from high school.

Katherine and Marvin were married in 1956 and had four children, three daughters and a son. Their children were raised on their 10 acre chicken farm. They lived 52 years of their married life in Aldergrove, BC.  They recently moved back to Abbotsford, BC.

When they were in their early thirties, their lives and priorities changed dramatically when they yielded total control of their lives to Jesus Christ and practised walking in the power of the Holy Spirit.

In 1974, Marvin was asked to be the National Director of Campus Crusade for Christ, Canada.  He was director for 28 years, during which Katherine started and served in several ministries:

She served as the producer and executive editor of Women Today Magazine, which was read in over 140 countries. In 1995, she began a website version of the magazine.  In only a few years, the website grew to five websites, in English and French. When she transferred her ministry responsibilities to other women, over 220,000 women from 155 countries visited these websites every month. More than 11,000 women subscribe to her devotionals.

When Dreams Come True: Her first book, When Dreams Come True: Women Today Online was published in September 2001.  In October of that same year she was included in The Celebration of Women, a book that profiled influential Christian leaders from around the world. Articles about her have been published in several publications such as Faith Today, Maranatha, and Christian Leadership.

Retirement With a Purpose: In 2002, Katherine decided to target another Internet audience – men and women over 50 years of age. In September of that year, the website Retirement With a Purpose was launched. The purpose of this monthly ezine was to be a resource to both men and women who are seeking for opportunities to have a significant impact during the second half of their lives. In the 33 months she directed this website, the audience grew to over 95,000 visitors from 195 countries each month.

Secrets of Success: Together with a motivated team, Marvin and Katherine directed Secrets of Success TV programs and website for over four years.  Millions of people were exposed to the gospel and thousands committed their lives to Jesus Christ.

Thoughts About God is her most recent website. Together with her staff team they: