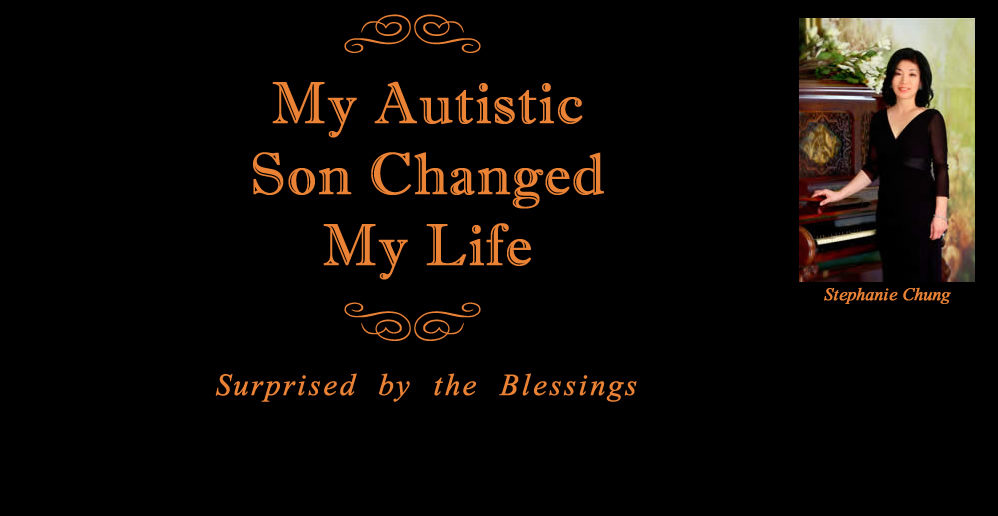 For most of her adult life, Stephanie Chung led a double life.

In public she was the beautiful and talented wife of successful businessman, Peter Chung. A concert pianist, she was a celebrity in her own right. But what most people didn’t know was that at home in her private life she struggled almost daily against the depression and stigma that came with being the mother of a severely handicapped son.

In Stephanie’s Korean culture, families are reluctant to admit to having children with disabilities. In fact, they are regarded as being a disgrace to their parents and bringing misfortune upon their families. For this reason, many people hide their disabled children and don’t ever acknowledge their existence outside of the home.

Stephanie had five children.  Her first child, Joseph, was born with autism but she wasn’t aware of it for a number of years.  She noticed that there was a slight difference between her first two sons.  But it wasn’t until she tried enrolling him in preschool that Stephanie realized just how different Joseph really was.

“I think you should take Joseph to a doctor,” the preschool teacher told her.

Still Stephanie was sure it was just a matter of cultural or language differences that made her oldest son different from his peers. She decided to find a Korean preschool and bring him there. However it wasn’t long before his new preschool teacher suggested he might have some learning disabilities and maybe he should see a doctor.

Joseph’s Diagnosis
Sure enough, doctors diagnosed Joseph with autism, a condition Stephanie had never heard of before. When she realized there was no cure for her son, she sank into a deep depression. You see, in her culture, a disabled child is considered a disgrace and it’s not unusual for families to hide their disabled children away. In her darkest hours, filled with shame and hurt, Stephanie questioned why she or her son had ever been born.

Finally she learned how to live a double life. In public she seemed like she had a perfect life. Her husband was a successful businessman; she herself was a concert pianist. But few people saw the pain she suffered in private.

When Joseph was about 8 his school went on a field trip – swimming at the ocean. Stephanie was consumed with last minute details for a wedding being held at their home that weekend. Swimming was one activity Joseph excelled at and he was eager to be off for the day.

The Phone Call
That afternoon, Stephanie received a phone call that would change her life forever. Her son was in the hospital from a drowning accident.  When Stephanie asked if they’d been able to revive him the voice on the end of the line would only say, “Drive safely!.” In that instant Stephanie realized she didn’t care if her son was handicapped; she only wanted him to be alive.

The ten minute drive to the hospital never took forever. Stephanie pleaded with God to spare her son’s life. At the hospital, the prognosis was dire. Her son had been found by a surfer, floating in the ocean. By the time they’d gotten help, he’d ingested so much water that doctors said if he didn’t regain consciousness within 48 hours; they should disconnect him from life support.

Stephanie stayed by her eldest son’s side that night, begging God to forgive her for her sinful attitude and to let Joseph live. The next morning she softly called Joseph’s name and his eyes opened. Her prayers had been answered!

Depression Lifted
Somehow, during that awful night, everything changed for Stephanie. Her depression lifted. She says,

“before I used to complain and ask God, ‘Why me?’ Nothing has changed for Joseph and yet now I am so thankful for him; so full of love towards him.”

And instead of hiding away, mired in depression, Stephanie focused on God’s plan for her. She says that despite the depression and the feelings of self pity and anger, in her heart of hearts she always knew that God loved her. This was the string holding her to God and the hope which enabled her to carry on. And now she knows that instead of allowing negative feelings to overwhelm her, she needs to pour out her heart to the God who loves her and who alone knows the plan and the purpose for Joseph’s life – as well as her own.

Stephanie was scheduled to accompany a famous Korean singer at a concert in Vancouver. A local reporter contacted Stephanie to interview her to get the ‘local angle’. Usually when she was interviewed, and the topic of her family came up, Stephanie would skim over each child very quickly, in particular avoiding the topic of her oldest son, Joseph. For some reason on this day, the interviewer pressed her for information about him. Without thinking, Stephanie blurted out,

“he’s handicapped, and he’s a blessing.”

Well, when the interview was printed the title was,

“Stephanie Chung has an angel; his name is Joseph.”

And there was barely a word about the concert in the article!

Up until now, some people had known that Stephanie and Peter had an autistic son, but it certainly hadn’t been something that was widely known. With this article, not only was she letting the world know about Joseph’s condition, she was telling them how proud she was of him and that he was indeed one of the biggest blessings in her life.  Through the article, Stephanie invited women in similar situations to contact her.

“I knew what these women were going through,” shares Stephanie, “I’d been there. I wanted to be that shoulder for them, to hug them, cry with them, and let them know it would be okay.”

Still, she was amazed when the phone calls started. Not long after the article was published, Stephanie met with four other moms at a local restaurant. They met as strangers. After two hours of sharing their common pain, their loneliness and their frustrations, they left as sisters.

Support Group and Bible Study Group
From these women meeting together a Bethesda Parents’ Society was formed. At first it was just the five of them. They met once a month and pooled their resources and their own experiences to help each other. They laughed and cried together. Eventually God told Stephanie to start a Bible Study. Stephanie knew from her own experience that she couldn’t have made it without God.

“Sure, other people comforted me throughout this, but true comfort and peace; you can only get that from God.”

And that was the message that the small Bible study talked about each week. At first it was just the core five women: 3 Christians, an agnostic and a Buddhist. But within six months the Buddhist mother had committed her life to Christ. Not long after this the women were talking and her friend exhorted her,

“You know, Joseph is a missionary. It’s because of him that you started this group and without this group I would never have become a Christian.”

Tears begin to fall as Stephanie shared with me,

“I’d never shared this with anyone before. But when I was pregnant with Joseph, my husband, my pastor and I prayed together. I told God that I wanted to give my son to Him, to be a servant. I was hoping that he would be a pastor or a missionary.”

‘For I know the plans I have for you, plans to prosper and not to harm you.’

But when it came to Joseph I always thought that God had to heal him before he could fulfill God’s plans for him. My friend showed me that God was already using Joseph.”

Today more than 35 mothers and fathers of mentally handicapped children belong to the Bethesda Parents’ Group and there is also a group who meet weekly for Bible Study. Through this group Stephanie has had the opportunity to share the gospel with people would never would have met and they have come to know Jesus as their Lord and Saviour.

If you’re interested in starting up a group in your own area, Stephanie’s advice is simple.

“Everyone’s circumstances are different. Having an autistic son has opened up doors for me to witness to people I never would have been able to approach otherwise. Ask God to show you how you can use your own unique situation to begin witnessing. If you’re a mom, connect with other moms at a preschool group. Be available and God will make the way.”

Available January 2018 in paperback and Kindle.

**Please note. Due to Stephanie’s busy schedule, she is unable to answer any questions about the treatment or medication for autistic children.

Farewell to Joseph: With much sadness, we announce the passing of Joseph Hongyul Chung, who returned to the arms of the Lord shortly after midnight on September 27, 2012. Joseph was 32 and passed away peacefully with his parents at his bedside at Peace Arch Hospital in White Rock. He underwent complications after suffering a seizure while swimming, one of his favorite past times.