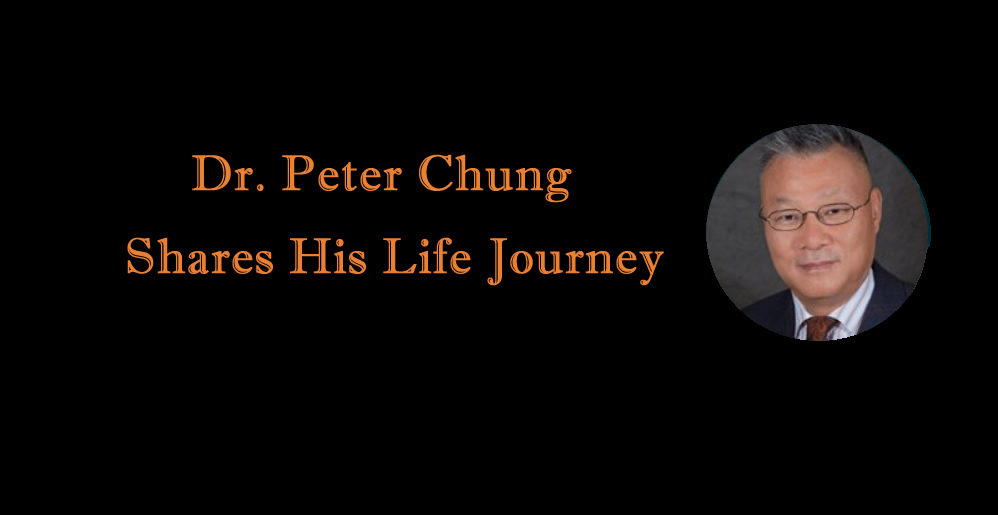 Dr. Peter Chung is a Vancouver-based entrepreneur with over 30 years of global experience in the fields of education, commerce, industry and real estate. He is Executive Chairman of the Primacorp Ventures Inc.

Moving from South Korea to North America
I came to North America as a boy. I was 14 years old and my family settled in the Los Angeles area. Immediately upon my arrival, I was put into an English as Second Language class to learn to speak English. In Korea, we lived close to the US 8th Army division base, so as a child, I grew up thinking there were only two other types of people, black soldiers and white soldiers, and that they all spoke English. So you can imagine my determination to speak English, and when I settled in Los Angeles and went to school, I worked really hard to make friends with those who were black and white and who spoke this wonderful language. I would talk with my friends outside of class, and study hard in class. After a month or so, it started to dawn on me that the language I was communicating in with my friends was different than the language I was learning in class. I realized I was learning Spanish.

My First Business
While I was in high school I was a bit of a rebel. I was angry that my father’s low-paying job as pastor of a small Korean church in Los Angeles meant that my mother had to work long hours in a sewing factory making ties to support the family. So it was with this background that I opened a Tae Kwon Do school and taught fellow students in an effort to help make ends meet. In the 70s, Bruce Lee was becoming a hero in the martial arts, making martial arts very popular, so I approached my student council president to see if I could give a Tae Kwon Do demonstration at the school. Our school had three thousand students, and fifteen hundred showed up! From there, I recruited thirty students to start my first class. This was my 1st business!

But I knew, inside, there was more.

Successful Businesses
I started my own businesses in private education, banking, real estate and automobile safety engineering. Things grew very quickly and as they grew, I was humbled and gave thanks to God for His blessings. Before I went to work, I used to kneel down on my 2nd floor balcony looking at the ocean, mountains and sky and pray, “Lord who am I to be blessed with such magnitude? You know I don’t deserve this. Help me to glorify You throughout the day. “I prayed this prayer every day.

After a while people started telling me how smart and successful I was. My response to them was, “It is not me; God is the one who is blessing me”. Many people wanted to be my friend and continued to tell me how successful I was. The media wanted to do interviews and they did stories on me. As time passed by I started thinking that maybe I was not dumb after all. Maybe I was smart.

Business Reversals
At its peak, I had 14 businesses, and as they grew, unfortunately so did my ego and arrogance. I lost humility, and this coupled with a significant business reversal resulted in a loss of 95% of my assets. At this point, I turned back to God, and asked “why me”?  I had made many donations to mission groups, Christian charity and helped the poor. I asked God why He was putting me in these circumstances. I became very lonely because most of the people who I thought were my friends quickly ran the other way. I realized that the only trust I had was in God. I turned to my wife and family and we prayed together. I realized I can only eat one meal at a time, sleep in one bed at a time, and wear one pair of pants at a time.

I used to think that I was a big shot, now I know now that I am not. God is the biggest shot of all. I am nothing without God.

Changed My Attitude
So I repented, asked for forgiveness and asked God to make me humble again. I promised myself and promised God that I would give all credit to Him if I were to be given another chance, and that is how I am standing here in front of you tonight.

In our world, there is little certainty. We try to define success with words like fame, power, honour, wealth, status. There is nothing wrong with being successful as long as we understand God is the one who gives us ability to produce success. Also we must understand all these are temporal measures in our temporal world. When I die, I am not going to take any of these with me. The most important thing is, as said by King Solomon, “vanity is vanity, all is vanity. Fear the Lord and keep His commandments. Do good while you are living, this will bring you happiness.” To me, this is key to success.

Joseph
Through all of this my wife Stephanie and I were blessed with five wonderful children. We thanked God and offered our 1st son Joseph as a missionary and devoted ourselves and Joseph to do God’s work. At the age of three, Joseph was diagnosed with autism, and by the age of seven, he had developed a seizure disorder that would eventually be diagnosed as epilepsy.

We asked God why Joseph was given these difficult challenges. After all, he was dedicated to the Lord as missionary. Thru many prayers and tribulations, we realized Joseph was a missionary to our family.

On September 26, 2012 at 6:35 pm, I received a phone call from Joseph’s caretaker. She said Joseph was found in the bottom of a swimming pool and he was on his way to the hospital. I asked, “Is he ok?” She said he was breathing and that he should be okay. So I thought everything would be fine. An hour later, I received a call from my wife Stephanie and she told me to come to the hospital right away. At 12:40 am on September 27, 2012, at the young age of 32, God took our handsome Joseph home.

It was so sudden and as you can imagine, Stephanie and I were in shock. I was told by many of my Christian friends that children are a gift from God to be raised by us while we are on this earth. Children are not our own. When God took Joseph home, the real meaning of this struck me. In such a painful way, I learned that death waits for no one. When it comes, you must be ready, and that as a parent, you must love and cherish your children.

God’s love embraces us all and as He turned His face as His Son Jesus died on the cross, I had a glimpse of the pain of God the Father. At the same time, I felt God’s love. As a Christian I have hope that I will one day see my son Joseph again.

I recently wrote a thank you letter to Jesus Christ, and in it I gave thanks for ten things. It was not easy to do this, but knowing my son Joseph is in Heaven, I was able to complete it. Tonight, I want to share two things I am thankful for:

Thank you God, for 32 years of Joseph’s life on this earth for us to enjoy and we are all eternally grateful.

Thank you God, for giving us compassion toward special needs people and their families.

We are grateful to God that He is using Joseph as His missionary today. I would like to share a couple of these with you. The Joseph Chung Scholarship Fund continues to grow to allow students to work hard and study so that they may walk the path that Joseph could not, and work to enlarge God’s Kingdom as Joseph surely would have done. We want to give thanks and glory to God that in 2012, God allowed us to fund over $400,000 to students who are pursuing post secondary education.

And also, Joe’s Table, a coffee shop, my wife Stephanie’s dream, that employs people with differing abilities, opened in July 2013. Joseph had a mission, and indeed, he has a mission, and that mission carries on today.

We are approaching Christmas Day. This will be my 58th Christmas on this earth, and my first in so many without my son Joseph. This Christmas will be the most meaningful Christmas to me, for without Christmas, there would be no death on the cross, and no resurrection. I now live with faith in God, and know that after I die, I will be reunited with my son in Heaven.

This week, we visited Joseph’s grave, and as a family, we sang his favourite hymns. We cried together and we prayed together, we gave thanks to the Lord for Joseph’s place in Heaven and for the belief that we will see him again one day. While there, I noticed another tombstone behind Joseph’s grave. That person was the same age as me. I noticed other tombstones, some people were older and some were younger. Stephanie and I were doing estate planning for Joseph so he could be taken care of after we die. Who would have thought that my son, Joseph was going to die before we die?

Death does not discriminate. We must be ready and we must have hope. We must know where we are going, we just do not know when.

I ask you to take to your heart what I have shared with you. Joseph is in Heaven because God so loved us He gave his only begotten son. Whosoever believes in Him shall not perish but have eternal life.

Thank you for allowing me to share my journey.

Dr. Peter Chung is a Vancouver-based entrepreneur with over 30 years of … In 1995, Dr. Chung founded the Eminata Group, an organization of schools and …

Dr. Peter Chung is a Vancouver-based entrepreneur with over 30 years of global experience in the fields of education, commerce, industry and real estate. Dr. Chung received his education from UCLA, Pepperdine University, California Polytechnic State University, Stanford and Harvard in the fields of Mathematics, Computer Science, Industrial Engineering and Business Administration and Management. In 2003, Dr. Chung received an honorary Doctorate of Humane Letters for his contribution to human welfare. In 2007, he was appointed Paraguay’s Honorary Consul to Canada and served in that post until 2011. Dr. Chung currently serves on the boards of Pepperdine University and the Vancouver Symphony Orchestra.

Dr. Chung’s humanitarian and charitable works include supporting and serving on the boards of Power to Change, Global Connections International and the Great Commission Foundation, amongst others. In 2008, through Lift Up Canada, Dr. Chung donated over a thousand scholarships for inner-city children to pursue post-secondary education. In 2008, he established the Joseph Chung Scholarship Fund at Regent College, in 2011 the Joseph Chung Endowment at Pepperdine University, and in 2012 a $75,000 Joseph Chung Endowment at Briercrest College and Seminary. All funds were allotted to assist those pursuing higher education in the field of special education.

In 1995, Dr. Chung founded the Eminata Group, an organization of schools and health care facilities, to contribute to society by changing lives through education, service and care.