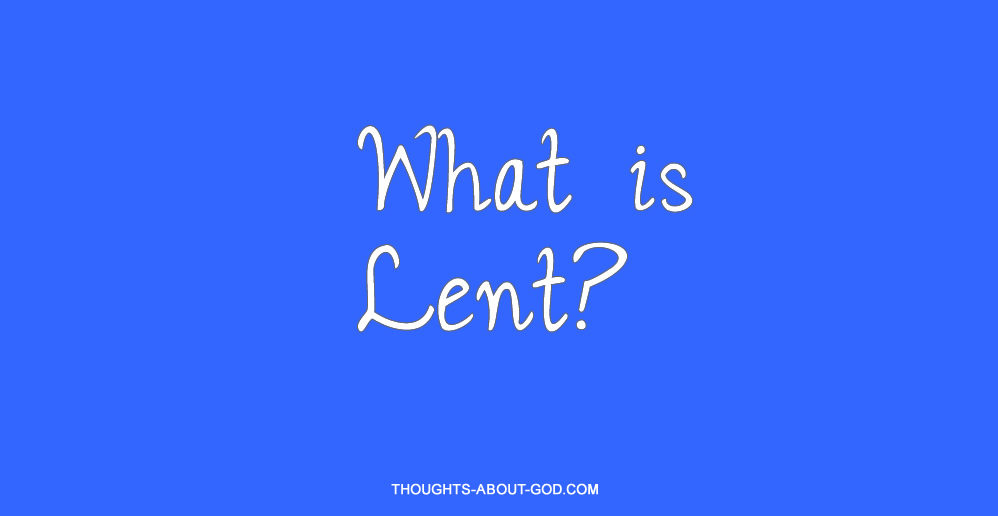 Lent is a Christian Celebration

Lent is a time when Christians prepare for Easter by reflecting on Jesus Christ’s suffering, his sacrifice, life, death, burial and resurrection.  The purpose of Lent is self-examination and penitence, demonstrated by self-denial.  Some Christians use this as a time for fasting, for others it is a time of giving up something one loves i.e.  chocolate or coffee., to experience in a small degree the suffering that Christ experienced.

Lent is 40 days prior to Easter Sunday (Sundays are not included for some).  Ash Wednesday marks the first day.

From Bible Gateway: What is Lent? by Andy Rau

From Crosswalk: What is Lent: Honoring the Sacrifice of Jesus

Ash Wednesday falls this year on February 14, which happens to coincide with Valentine’s Day.

It marks the beginning of Lent, a period of fasting and penance observed for thousands of years by many Christians including, especially, Catholics as well as Anglicans, Methodists and Lutherans.

The time is meant to represent Jesus’s forty days and forty nights in the wilderness, during which he resisted temptations by the devil.

Lent is the darkness before the dawn. It leads up to the glory and joy of Easter, which this year is on April 1. Bizarrely, if you put ‘Lent’ into Google it says the period is from February 14 to March 29, but this is incorrect: in fact, Holy Week, the final week of Lent that includes Maundy Thursday and Good Friday, marking the Last Supper and the death of Jesus on the cross, is when Lent really intensifies and builds up to its climax.

Lent starts with Ash Wednesday, named so because traditionally Christians are ‘ashed’; their foreheads are marked with ash as a reminder of their mortality. ‘Remember you are dust, and to dust you shall return’ says the priest while doing this. The mark is also an act of witness: while some Christians believe that it should be washed off so as to avoid showiness, others prefer to go out into the world adorned with a public sign of the faith.

Ash Wednesday itself comes the day after Shrove Tuesday, known as pancake day, which is when many indulge in rich foods and sweets ahead of their Lenten fast.

But the Lenten fast is not just a two-dimensional giving up of chocolate for, say, health reasons.

Instead, real sacrifice – the abandonment of something that is difficult to give up – has a spiritual side, deepening the journey into the darkness before the light of the feast celebrating the resurrection on Easter Day.

This should go alongside intensified prayer and the reading of Scripture, and is often accompanied, for Catholics at least, with extra church services, especially the Stations of the Cross in which worshippers follow the stations marking Jesus’s final journey around the church (or in Jerusalem around the Old City itself).

Ideally, a Christian will grow closer to the Lord during Lent, relating in some small way to his suffering. As the Catholic Encyclopedia says: ‘The real aim of Lent is, above all else, to prepare men for the celebration of the death and Resurrection of Christ. The better the preparation, the more effective the celebration will be.’

According to the Catholic Education Resource Center, the word Lent itself is derived from the Anglo-Saxon words lencten, meaning ‘Spring’ and lenctentid, which literally means not only ‘Springtide’ but also was the word for ‘March,’ the month in which the majority of Lent invariably falls.

The Council of Nicea (in AD 325), in its disciplinary canons, noted that two provincial synods should be held each year, ‘one before the 40 days of Lent’ and before that there are reports of Lenten observance in the earlier church.

St Irenaeus (who died in AD 203) wrote to Pope St. Victor I, about the differences between Eastern and Western celebrations of Easter, saying: ‘The dispute is not only about the day, but also about the actual character of the fast. Some think that they ought to fast for one day, some for two, others for still more; some make their “day” last 40 hours on end. Such variation in the observance did not originate in our own day, but very much earlier, in the time of our forefathers.’

The number 40 has special significance in the Bible regarding preparation. On Mount Sinai, preparing to receive the Ten Commandments, ‘Moses stayed there with the Lord for 40 days and 40 nights, without eating any food or drinking any water’ (Ex 34:28), and Elijah walked ’40 days and 40 nights’ to the mountain of the Lord, Mount Horeb (another name for Sinai) (I Kgs 19:8).

How you observe Lent is of course up to you, and between you and God. But there is truth in the belief that if you have a bad Lent, you have a relatively bad Easter; but prepare properly, and have a good, sacrificial Lent, and the celebration will be all the greater when you come out the other side.