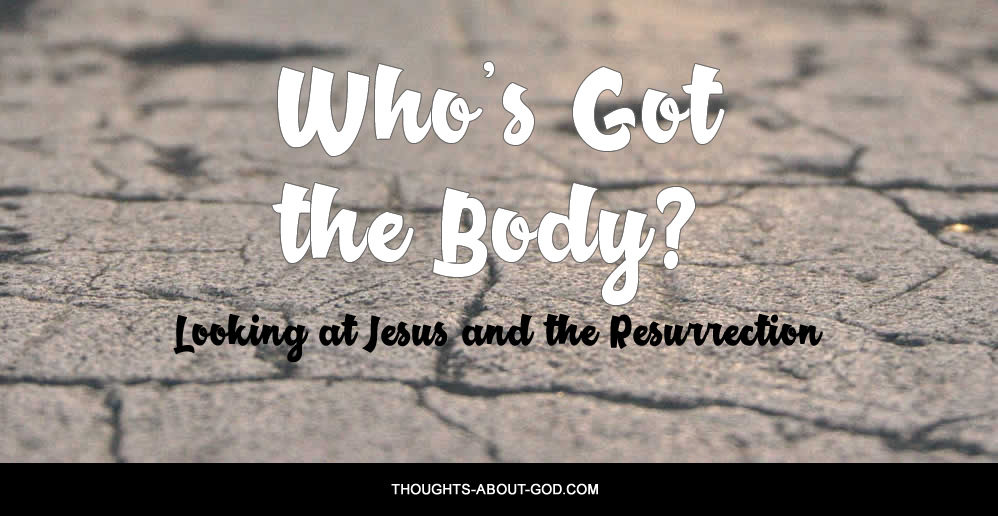 Who’s Got the Body? Rusty Wright and Linda Raney Wright provide a short documented examination of evidences for Jesus’ resurrection.

It makes all the difference in the world. If Christ did not rise, then thousands of Christians have lived and died for a hoax.

If, however, He did rise, then He is still alive and can act now to straighten out our chaotic world. Facts always speak louder than opinions. Let’s take a look at some of the historical evidence for the resurrection and see where the facts lead.

One preliminary consideration: countless scholars–among them, the apostle Paul, St. Augustine, Sir Isaac Newton and C. S. Lewis–believed in the resurrection. We need not fear committing intellectual suicide by accepting it also.

Paul wrote that “Christ died for our sins, He was buried, He was raised on the third day. He appeared to Cephas, then to the twelve. After that, He appeared to more than five hundred brethren at one time, most of whom remain until now. {1}

1. The Explosive Growth of the Christian Church

Within a few weeks after the crucifixion a movement arose which, by the later admission of its enemies, “upset the world.” {2} Something happened to ignite this movement a very short time after its leader had been executed. What was it?

2. The Changed Lives of the Disciples

After Jesus’ arrest and crucifixion, most of the disciples were frightened. Peter, for instance, denied Christ three times (twice to two servant girls!) Yet 10 out of the 11 disciples were martyred for their faith. Peter was crucified upside down; Thomas was skewered; John was boiled in oil but survived. Something had happened to revolutionize these men’s lives. Each believed he had seen the risen Christ.

Jesus’ dead body was removed from the cross, wrapped in graveclothes like a mummy, covered with 100 pounds of aromatic spices and placed in a tomb.{3} The tomb had been hewn out of rock{4} and apparently contained only one cavern.{5} An extremely large stone{6} was rolled into a slightly depressed groove at the tomb’s entrance.{7} Some have conservatively estimated the weight of the stone at one-and-a-half to two tons.

A crack “Green Beret” unit of Roman soldiers was placed out front to guard the grave.{8} The military discipline of the Romans was so strict that severe corporal and often capital punishment awaited the soldier who left his post or failed in his duty.{9} Sunday morning, the stone was found rolled away, the body was gone, but the graveclothes were still in place.{10} What happened?

Some say that Christ’s friends stole the body. This means that either one of the women sweet-talked the guards while the other two moved the stone and tip-toed off with the body, or else guys like Peter (remember how brave he was) and Thomas (how easily convinced he was) overpowered the guards, stole the body, and fabricated a myth.

These theories hardly seem plausible. The guard was too powerful, the stone too heavy, and the disciples, not yet experiencing the power of the Holy Spirit were too spinelesss to attempt such a feat.

Others say that Christ’s enemies stole the body. Yet if the Romans or Jews had the body, they would have exposed it publicly and Christianity would have died out. They didn’t and it didn’t.

Then there is the “swoon theory,” that Christ didn’t really die but was only unconscious. The expert Roman executioners merely thought He was dead. After a few days in the tomb, without food or medicine, the cool air revived Him. Then, according to this theory, He burst from the 100 pounds of graveclothes, rolled away the stone with His nail-pierced hands, scared the daylights out of the Roman soldiers, walked miles on wounded feet, and convinced His disciples that He’d been raised from the dead. This one is harder to believe than the resurrection itself.

In other words, if Jesus was put to death, who’s got the body? All that we do have is an empty tomb.

4. The Appearances of the Risen Christ

For 40 days after His death, Christ was reported to be seen alive on earth. Some say these were hallucinations, but do the accounts show that?

Only certain high-strung and imaginative types of people usually have such psychic experiences. Yet a woman, a stubborn tax collector, several fisherman and more than 500 people at one time claimed they saw Him. Hallucinations are very individualistic–contrasting with the fact that over 500 people saw the same thing at the same time and place.

Two other facts undermine the hallucination idea. Such imaginations are usually of expected events, yet the disciples had lost hope after the crucifixion. Also, psychic phenomena usually occur in cycles, but the appearances came in no set patttern.{11}

Attempts to explain away the appearances run into a brick wall of facts. The facts point to one conclusion: Christ is risen.

If the facts support the claim, then we can conclude that He arose. In any case, a mere intellectual assent to the facts does nothing for one’s life.

A major evidence comes experientially, in personally receiving Christ as Savior and Lord. Jesus said, “Behold I stand at the door and knock; if any one hears My voice and opens the door, I will come in to him.”{12}

Care to give Him a try?

Would you like to have a personal relationship with God through Jesus Christ? You can start by saying this simple prayer:

If you prayed this prayer today, we would love to hear from you . Perhaps we could connect you with a mentor or provide resourceful links that could help you learn how to know God in a deeper and deeper more satisfying way.

Linda Raney is an award-winning author, writer and speaker. A graduate of the University of California at Berkeley (AB, rhetoric), she has written for major magazines and has appeared on television talk shows as she has lectured in universities and cities around the world.