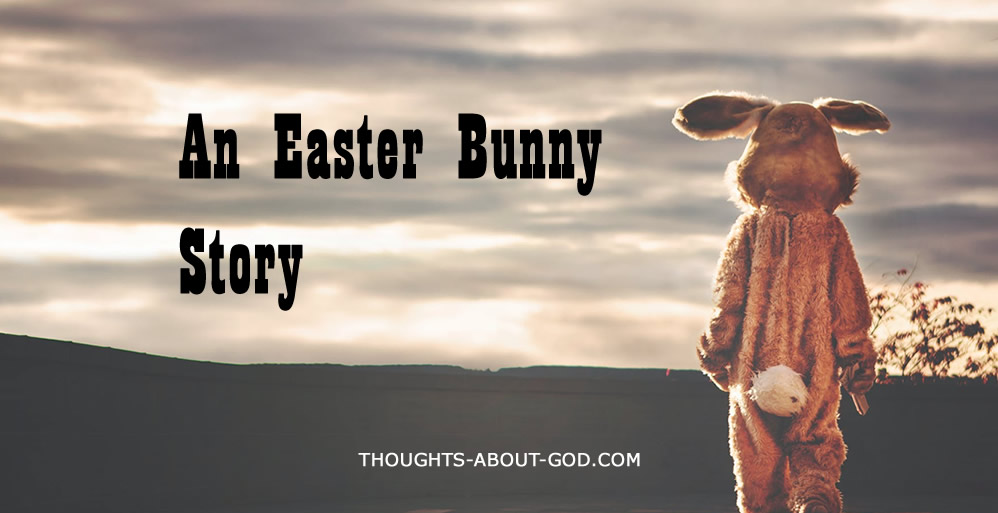 You’ve probably seen Santa Claus; but have you ever seen the Easter Bunny?

As a small child, I enjoyed visiting Santa at a local department store at Christmastime.  My parents would take me downtown to the jolly bearded man in the red suit.  I felt comfortable climbing into his lap, telling him my wish list and receiving a gift along with his encouraging words.  He was friendly, predictable and safe.

Imagine my excitement when one Spring I learned that the Easter Bunny would be at the same department store.  Neither I nor my family had ever seen the Easter Bunny.  I had seen white rabbits.  Those cute, cuddly little bunnies seemed so warm and innocent.  I looked forward for some time to seeing the real Easter Bunny.

Finally, the big day came.  My father took me to the store that afternoon.  When we reached the Bunny’s floor, I was shocked.  Before me was a human-sized hare with big eyes and large, floppy ears.  The creature walked on two legs like a human.  He talked.

The more clearly I saw him as I approached him, the more slowly I walked.  I would not get close to the furry beast.  He wanted to give me a gift, but I was not cooperating.  “Just throw it to me,” I suggested.  He tossed his present across the room, Frisbee-style.

Much as I was confused about the Easter Bunny, many folks are confused about the meaning of Easter itself.  For some, it means new clothes and a chance to show them off.  Others focus on eggs, candy and special meals.  Spring Break is a highlight of the season.  The beach beckons and relaxing on the sand or reveling at parties defines the holiday.

Easter is also billed as a time of renewal.  It may be relatively easy to renew things outwardly – new clothes, a hairstyle, a fancy party.  Renewal on the inside can be more difficult.  Problems from the past can haunt one’s memory.  Broken relationships undermine self-esteem.  Guilt over missed opportunities, pain from rejection, loneliness and anger from past hurts can sometimes create a swirling inner vortex, a psychological suction from which escape is difficult.

Where does one find inner renewal?  Some look to friends or family.  Counselors and self-help books provide coping skills.  But maybe a look at the first Easter could also offer some clues.

Nearly two millennia ago, a young Jewish leader fell into disfavor with established authorities.  He was executed, declared dead, wrapped up like a mummy and placed in a tomb.  A large stone was rolled against the tomb’s entrance and a crack unit of Roman soldiers guarded the tomb against grave robbers.

Two days later, the stone was rolled away, the tomb was empty but the grave clothes were still in place.  The man’s closest followers, most of whom had abandoned him during his trials, reported seeing him alive again.  Many later died horrible deaths for telling people that their leader had risen from the dead.

They had been transformed from the inside and it affected every facet of their lives, giving them inner strength, freedom from guilt, love for their enemies and boldness to stand for what they believed was right.  “Anyone who belongs to Christ,” wrote one early believer, “has become a new person. The old life is gone; a new life has begun!”

Sometimes life’s challenges can seem as scary as that huge hare seemed to me when I was a child.  We don’t want to get near them.  Yet that first Easter still offers hope.  Maybe if Jesus really did come back from the dead, then people today can find inner renewal by knowing him personally.

As we enjoy eggs and rabbits this Spring, might that be a message worth pondering?