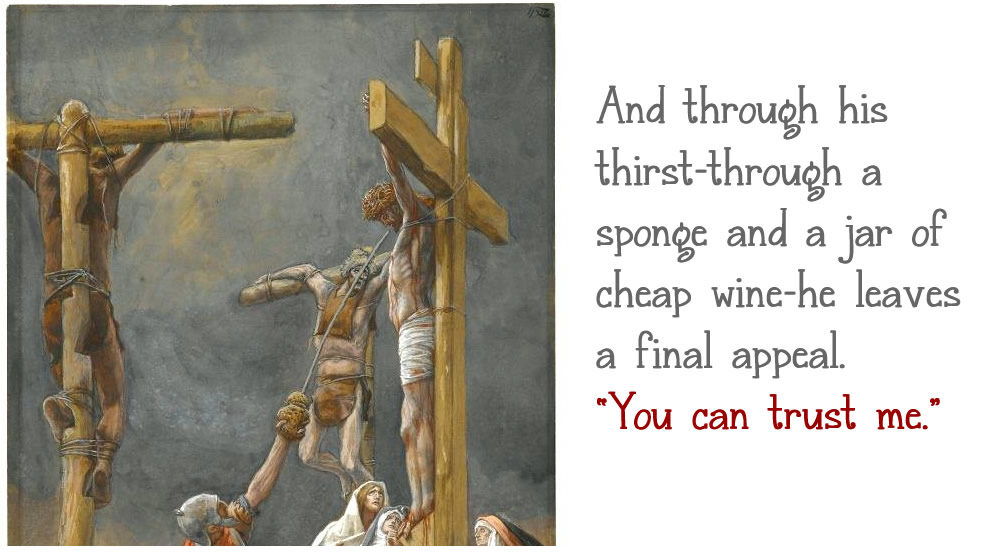 Jesus’ final act on earth was intended to win your trust.

This is the final act of Jesus’ life. In the concluding measure of his earthly composition, we hear the sounds of a thirsty man.

And through his thirst—through a sponge and a jar of cheap wine—he leaves a final appeal.

Jesus. Lips cracked and mouth of cotton. Throat so dry he couldn’t swallow, and voice so hoarse he could scarcely speak. He is thirsty. To find the last time moisture touched these lips you need to rewind a dozen hours to the meal in the upper room. Since tasting that cup of wine, Jesus has been beaten, spat upon, bruised, and cut. He has been a cross-carrier and sin-bearer, and no liquid has salved his throat. He is thirsty.

Why doesn’t he do something about it? Couldn’t he? Did he not cause jugs of water to be jugs of wine? Did he not make a wall out of the Jordan River and two walls out of the Red Sea? Didn’t he, with one word, banish the rain and calm the waves? Doesn’t Scripture say that he “turned the desert into pools” (PSALM 107:35 NIV) and “the hard rock into springs” (PSALM 114:8 NIV)?

If so, why does Jesus endure thirst?

Why? And why did he grow thirsty on the cross?

He didn’t have to suffer thirst. At least, not to the level he did. Six hours earlier he’d been offered drink, but he refused it.

They brought Jesus to the place called Golgotha (which means The Place of the Skull). Then they offered him wine mixed with myrrh, but he did not take it. And they crucified him. Dividing up his clothes, they cast lots to see what each would get. (Mark 15:22–24 NIV, italics mine)

Before the nail was pounded, a drink was offered. Mark says the wine was mixed with myrrh. Matthew described it as wine mixed with gall. Both myrrh and gall contain sedative properties that numb the senses. But Jesus refused them. He refused to be stupefied by the drugs, opting instead to feel the full force of his suffering.

Why? Why did he endure all these feelings? Because he knew you would feel them too.

And because he understands, we can come to him.

Would you like to accept Jesus today?  You can do so right now  by sincerely praying the following prayer.

Jesus has Forgiven you, but Have you forgiven Yourself ?

The Power of Resurrection – by William S. Stoddard

In Prison sentenced to Death – by Mike Woodard

Touched by the Risen Lord by Elfrieda Nikkel