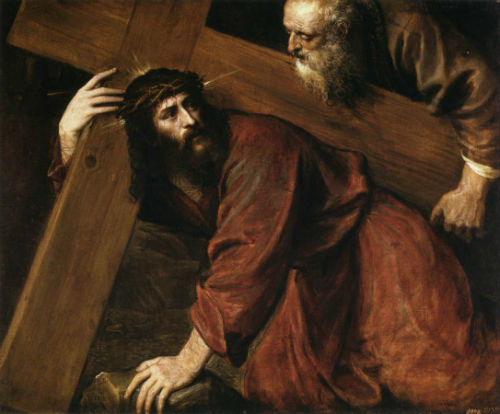 “A man named Simon from Cyrene, the father of Alexander and Rufus, was coming from the fields to the city. The soldiers forced Simon to carry the cross for Jesus” (Mark 15:21)

Simon grumbles beneath his breath. His patience is as scarce as space on the Jerusalem streets. He’d hoped for a peaceful Passover. The city is anything but quiet. Simon prefers his open fields. And now, to top it off, the Roman guards are clearing the path for some who-knows-which-dignitary who’ll march his soldiers and strut his stallion past the people.

Simon’s head and dozens of others turn. In an instant they know. This is no dignitary.

“It’s a crucifixion,” he hears someone whisper. Four soldiers. One criminal. Four spears. One cross. The inside corner of the cross saddles the convict’s shoulders. Its base drags in the dirt. Its top teeters in the air. The condemned man steadies the cross the best he can, but stumbles beneath its weight. He pushes himself to his feet and lurches forward before falling again. Simon can’t see the man’s face, only a head wreathed with thorny branches.

The sour-faced centurion grows more agitated with each diminishing step. He curses the criminal and the crowd.

“Little hope of that,” Simon says to himself.

The cross-bearer stops in front of Simon and heaves for air. Simon winces at what he sees. The beam rubbing against an already raw back. Rivulets of crimson streaking the man’s face. His mouth hangs open, both out of pain and out of breath.

“His name is Jesus,” someone speaks softly.

“Move on!” commands the executioner.

But Jesus can’t. His body leans and feet try, but he can’t move. The beam begins to sway. Jesus tries to steady it, but can’t. Like a just-cut tree, the cross begins to topple toward the crowd. Everyone steps back, except the farmer. Simon instinctively extends his strong hands and catches the cross.

Jesus falls face-first in the dirt and stays there. Simon pushes the cross back on its side. The centurion looks at the exhausted Christ and the bulky bystander and needs only an instant to make the decision. He presses the flat of his spear on Simon’s shoulders.

Simon growls, balances the timber against his shoulder, and steps out of the crowd onto the street, out of anonymity into history, and becomes the first in a line of millions who will take up the cross and follow Christ.

He did literally what God calls us to do figuratively: take up the cross and follow Jesus.

“If any of you want to be my followers, you must forget about yourself. You must take up your cross each day and follow me” (Luke. 9:23 CEV).

“Father, Forgive Them” by Max Lucado

Thirsty on the Cross – What we can learn from Jesus last appeal on the cross.

An Easter Bunny – and an Easter Story –  A child’s humour