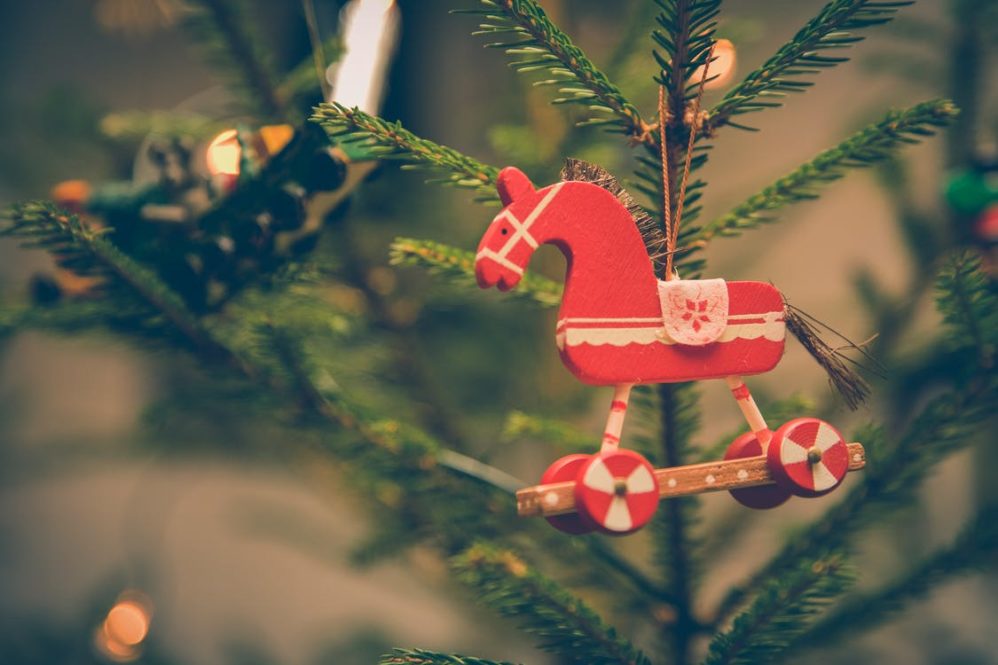 My dad had as much pride as anybody, I suppose, so he wouldn’t just say that we couldn’t afford one.

When I mentioned it, my mother said that we weren’t going to have one this year, that we couldn’t afford one, and even if we could – it was stupid to clutter up your house with a dead tree.

I wanted a tree badly though, and I thought – in my naïve way – that if we had one, everybody would feel better.

Taking Matters into my Own Hands
About three days before Christmas, I was out collecting for my paper route.

It was fairly late – long after dark – it was snowing and very cold.

I went to the apartment building to try to catch a customer who hadn’t paid me for nearly two months – she owed me seven dollars.

Much to my surprise, she was home.

She invited me in and not only did she pay me, she gave me a dollar tip!

It was a windfall for me – I now had eight whole dollars.

What happened next was totally unplanned.

On the way home, I walked past a Christmas tree lot and the idea hit me.

The selection wasn’t very good because it was so close to the holiday, but there was this one real nice tree.

It had been a very expensive tree and no one had bought it; now it was so close to Christmas that the man was afraid no one would.

He wanted ten dollars for it, but when I – in my gullible innocence – told him I only had eight, he said he might sell it for that.

I really didn’t want to spend the whole eight dollars on the tree, but it was so pretty that I finally agreed.

I dragged it all the way home – about a mile, I think – and I tried hard not to damage it or break off any limbs.

The snow helped to cushion it, and it was still in pretty good shape when I got home.

You can’t imagine how proud and excited I was.

I propped it up against the railing on our front porch and went in.

My heart was bursting as I announced that I had a surprise.

I got Mom and Dad to come to the front door and then I switched on the porch light.

Surprise!!
“Where did you get that tree?” my mother exclaimed.

But it wasn’t the kind of exclamation that indicates pleasure.

“I bought it up on Main Street. Isn’t it just the most perfect tree you ever saw?” I said, trying to maintain my enthusiasm.

“Where did you get the money?” Her tone was accusing and it began to dawn on me that this wasn’t going to turn out as I had planned.

“From my paper route.” I explained about the customer who had paid me.

“And you spent the whole eight dollars on this tree?” she exclaimed.

She went into a tirade about how stupid it was to spend my money on a dumb tree that would be thrown out and burned in a few days.

She told me how irresponsible I was and how I was just like my dad with all those foolish, romantic, noble notions about fairy tales and happy endings and that it was about time I grew up and learned some sense about the realities of life and how to take care of money and spend it on things that were needed and not on silly things.

She said that I was going to end up in the poorhouse because I believe in stupid things like Christmas trees, things that didn’t amount to anything.

I Just Stood There
My mother had never talked to me like that before and I couldn’t believe what I was hearing.

I felt awful and I began to cry.

Finally, she reached out and snapped off the porch light.

“Leave it there,” she said. “Leave that tree there till it rots, so every time we see it, we’ll all be reminded of how stupid the men in this family are.”

Then she stormed up the stairs to her bedroom and we didn’t see her until the next day.

Dad and I brought the tree in and we made a stand for it.

He got out the box of ornaments and we decorated it as best as we could; but men aren’t too good at things like that, and besides, it wasn’t the same without mom.

There were a few presents under it by Christmas day – although I can’t remember a single one of them – but Mom wouldn’t have anything to do with it.

It was the worst Christmas I ever had.

Fast Forward to Today
Judi and I married in August of 1963, and dad died on October 10 of that year. Over the next eight years, we lived in many places. Mom sort of divided up the year – either living with my sister Jary or with us.

In 1971 we were living in Wichita, Kansas – Lincoln was about seven, Brendan was three and Kristen was a baby. Mom was staying with us during the holidays. On Christmas Eve I stayed up very late. I was totally alone with my thoughts, alternating between joy and melancholy, and I got to thinking about my paper route, that tree, what my mother had said to me and how Dad had tried to make things better.

I heard a noise in the kitchen and discovered that it was mom. She couldn’t sleep either and had gotten up to make herself a cup of hot tea – which was her remedy for just about everything. As she waited for the water to boil, she walked into the living room and discovered me there. She saw my open Bible and asked me what I was reading. When I told her, she asked if I would read it to her and I did.

The Truth Comes Out
When the kettle began to whistle, she went and made her tea. She came back, and we started to visit. I told her how happy I was that she was with us for Christmas and how I wished that Dad could have lived to see his grandchildren and to enjoy this time because he always loved Christmas so. It got very quiet for a moment and then she said, “Do you remember that time on Twelve Mile Road when you bought that tree with your paper route money?”

She hesitated for a long moment, as though she were on the verge of something that was bottled up so deeply inside her soul that it might take surgery to get it out. Finally, great tears started down her face and she cried, “Oh, son, please forgive me.”

“That time and that Christmas have been a burden on my heart for twenty-five years. I wish your dad were here so I could tell him how sorry I am for what I said. Your dad was a good man and it hurts me to know that he went to his grave without ever hearing me say that I was sorry for that night. Nothing will ever make what I said right, but you need to know that your dad never did have any money sense (which was all too true).

We were fighting all the time – though not in front of you – we were two months behind in our house payments, we had no money for groceries, your dad was talking about going back to Arkansas and that tree was the last straw. I took it all out on you. It doesn’t make what I did right, but I hoped that someday, when you were older, you would understand. I’ve wanted to say something for ever so long and I’m so glad it’s finally out.”

Well, we both cried a little and held each other and I forgave her – it wasn’t hard, you know.

Then we talked for a long time, and I did understand; I saw what I had never seen and the bitterness and sadness that had gathered up in me for all those years gradually washed away.

It was marvelously simple.

The great gifts of this season – or any season – can’t be put under the tree; you can’t wear them or eat them or drive them or play with them. We spend so much time on the lesser gifts – toys, sweaters, jewelry, the mint, anise and dill of Christmas – and so little on the great gifts – understanding, grace, peace and forgiveness. It’s no wonder that the holiday leaves us empty, because when it’s over, the only reminders we have are the dirty dishes and the January bills.

The Great Gift
The great gifts are like the one gift – the gift that began it all back there in Bethlehem of Judea. You can’t buy them, and they’re not on anybody’s shopping list. They come as He came – quietly, freely, unexpectedly – and if you’re not careful, you’ll miss them entirely.

Do you have unforgiveness in your life that is making life miserable for you?  Why not let Jesus show you how to forgive those who have hurt you? If you don’t know Jesus, we encourage you to pray the following prayer: