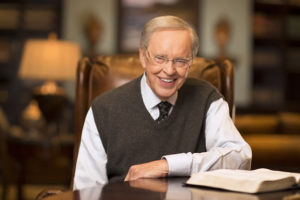 ATLANTA, GEORGIA – Dr. Charles F. Stanley, senior pastor of the First Baptist Church of Atlanta and founder of In Touch Ministries, demonstrates a keen awareness of people’s needs by providing practical biblical truths for everyday life. Modeling his ministry after the apostle Paul’s message to the Ephesians, Dr. Stanley believes that: “Life is worth nothing unless I use it for doing the work assigned me by the Lord Jesus–the work of telling others the Good News about God’s mighty kindness and love” (Acts 20:24, TLB).

In 1971, Dr. Stanley became Senior Pastor of the First Baptist Church of Atlanta, Georgia. In 1972, a half-hour program called “The Chapel Hour” was launched on an Atlanta-area television station. Looking for a practical Bible teaching program, the Christian Broadcasting Network contacted Dr. Stanley in 1978 to request the program’s inclusion on its new venture, a satellite distribution network to cable systems. At no cost to First Baptist Church, the broadcast grew from 16,000 local, Atlanta viewers to a nationwide audience in one week. By 1982, In Touch Ministries was incorporated and began radio syndication. “In Touch” programs penetrated almost every major market in the United States during the 1980’s, reaching more than one-million households with the message of Christ’s sufficiency for life’s demands.

Today, “In Touch with Dr. Charles Stanley” can be heard around the world via radio and television broadcasts, the handheld In Touch Messenger and the ministries Web site, www.InTouch.org. “In Touch” programs are seen and heard domestically and internationally on nearly 1800 radio and television outlets in more than 50 languages. The ministry continues to produce CDs, DVDs, pamphlets, books and other Christian resource material, including its award-winning, monthly devotional magazine, In Touch.

Notable organizations and publishers have honored Dr. Stanley. In 1988, he was inducted into the National Religious Broadcaster’s (NRB) Hall of Fame for the consistent excellence of his broadcasts and his leadership in the realm of Christian television and radio. Religious Heritage of America named him Clergyman of the Year in 1989, an award that recognizes pastors who strive to make Judeo-Christian principles part of America’s daily life. In 1993, the NRB honored “In Touch” with the Television Producer of the Year award; and in 1999, with the Radio Program of the Year award. Just this year, Thomas Nelson Publishing recognized Dr. Stanley for selling more than 6.5 million copies of his books.

Dr. Stanley has also served two terms as president of the Southern Baptist Convention (1984-86) and first joined the NRB’s board of directors in 1982.

Dr. Stanley is also a New York Times best-selling author who has written more than 50 books, including: Finding Peace, How to Reach Your Full Potential for God, I Lift Up My Soul, In Step with God, Landmines in the Path of the Believer, Handle With Prayer, How to Listen To God, The Wonderful Spirit-Filled Life, The Source of My Strength, How to Handle Adversity, Success God’s Way, Surviving in an Angry World, and Turning the Tide.

Dr. Stanley’s earliest childhood memories are of God’s support during the difficult circumstances following the death of his father. Through the counsel and example of his godly mother and grandfather, he learned to trust and obey God’s Word. At the age of 14, Dr. Stanley received a clear call to the ministry, which later led him to earn a bachelor of arts degree from the University of Richmond in Richmond, Virginia, and a bachelor of divinity degree at Southwestern Theological Seminary in Fort Worth, Texas. He earned his master’s degree and doctorate from Luther Rice Seminary. Always practical, Dr. Stanley often says, “I feel I cannot honestly tell you how to believe Bible truths, and put these truths to work in your life, until I have first let God work them into my own life.”

Dr. Stanley’s messages tackle such issues as parenting, finances, personal crises, emotions, and relationships. Instructional teaching for personal spiritual growth focuses on prayer, the character of God, fellowship through the Holy Spirit, and the Person of Jesus Christ. Dr. Stanley fervently believes the Bible to be the inerrant Word of God, a belief strongly reflected in his teaching.

A common theme found throughout In Touch Ministries’ voluminous viewer and listener correspondence is how God has changed lives through Dr. Stanley’s teaching. Any success achieved by In Touch or Dr. Stanley is directly attributed to the hand of God. Dr. Stanley says, “It is the Word of God and the work of God that changes people’s lives.”

The goal of Dr. Charles Stanley is best represented by In Touch’s mission statement: to lead people worldwide into a growing relationship with Jesus Christ and to strengthen the local church. Dr. Stanley’s heart’s desire is to get the gospel to “as many people as possible, as quickly as possible, as clearly as possible, as irresistibly as possible, through the power of the Holy Spirit to the glory of God.”