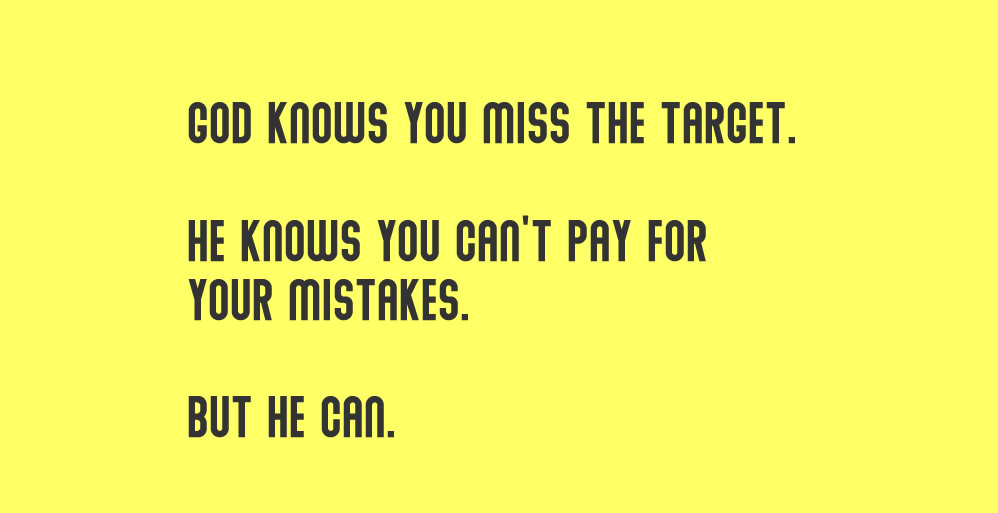 When We Miss the Target

Read the first verse of Matthew’s gospel. Jesus knew David’s ways. He witnessed the adultery, winced at the murders, and grieved at the dishonesty. But David’s failures didn’t change Jesus’ relation to David. The initial verse of the first chapter of the first gospel calls Christ “the son of David” (Matthew 1:1 KJV). The title contains no disclaimers, explanations, or asterisks. I’d have added a footnote: “This connection in no way offers tacit approval to David’s behavior.” No such words appear. David blew it. Jesus knew it. But he claimed David anyway.

He did for David what my father did for my brother and me.

Back in our elementary school days, my brother received a BB gun for Christmas. We immediately set up a firing range in the backyard and spent the afternoon shooting at an archery target. Growing bored with the ease of hitting the circle, my brother sent me to fetch a hand mirror. He placed the gun backward on his shoulder, spotted the archery bull’s-eye in the mirror, and did his best Buffalo Bill imitation. But he missed the target. He also missed the storehouse behind the target and the fence behind the storehouse. We had no idea where the BB pellet flew. Our neighbor across the alley knew, however. He soon appeared at the back fence, asking who had shot the BB gun and who was going to pay for his sliding-glass door.

At this point I disowned my brother. My father was more noble than I. Hearing the noise, he appeared in the backyard, freshly rousted from his Christmas Day nap, and talked with the neighbor.

Among his words were these:

“Yes, they are my children.”

“Yes, I’ll pay for their mistakes.”

“God sent Jesus to take the punishment for our sins” (Romans 3:25 NLT).

Since he was sinless, he could.

Since he loves you, he did.

He became one of us to redeem all of us.

“Jesus, who makes people holy, and those who are made holy are from the same family. So he is not ashamed to call them his brothers and sisters” (Hebrews 2:11 NCV).

By Max Lucado
From:Facing Your Giants
Used by permission

To learn more about Max Lucado visit his website at:
http://maxlucado.com/about/

Comments: If you don’t see our response form, please go to https://thoughts-about-god.com/blog/max-lucado_miss-target/