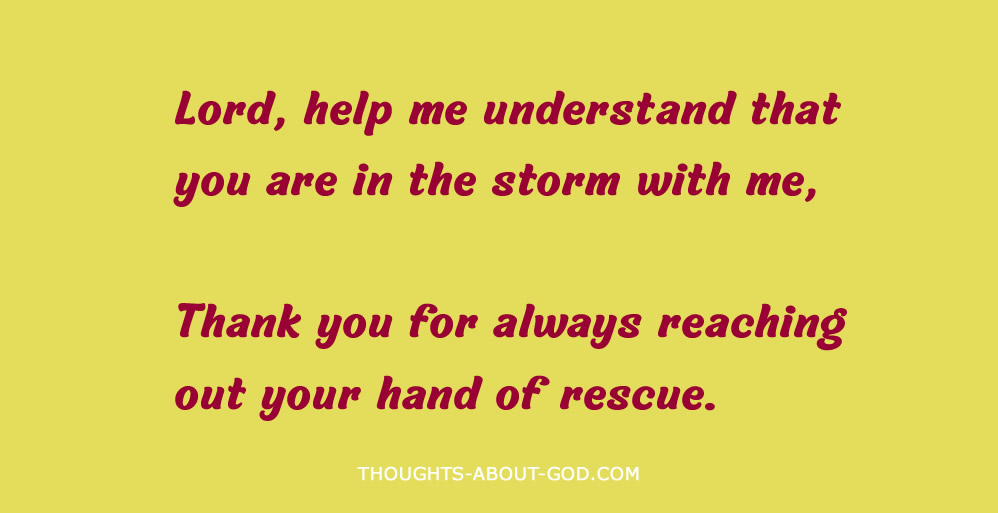 With Us In the Storm

My cry is often, “Stop the storm, Lord!” but frequently Jesus simply asks that I take his hand as we together walk through the battering winds

Jesus didn’t stand safely on the peaceful, sandy beach as his friends were buffeted by the winds and drenched by the waves. Instead he walked on the roiling water toward his quaking friends in the rocking boat. His garments, like their own, whipped in the wind and were soon soaked. Peter hears the “come” of Jesus and dares to answer, but shortly he succumbs to his fears and the elements until Jesus grasps his hand in the midst of the still-raging storm. It is only when the two scramble into the boat that peace prevails: When they climbed into the boat, the wind died down.

My cry is often, “Stop the storm, Lord!” but frequently Jesus simply asks that I take his hand as we together walk through the battering winds of discouragement, loss, and—yes—even fear. Eventually we will climb into a boat of safety but it may take awhile for my heartbeat to settle, my perspective to change to where I, like the disciples, will say, “Truly you are the Son of God.”

Lord, help me understand that you are in the storm with me, that your desire is for my own good and your glory. Thank you for always reaching out your hand of rescue.

Matthew 14:23-33
And when He had sent the multitudes away, He went up on the mountain by Himself to pray. Now when evening came, He was alone there. But the boat was now in the middle of the sea, tossed by the waves, for the wind was contrary.
Now in the fourth watch of the night Jesus went to them, walking on the sea. And when the disciples saw Him walking on the sea, they were troubled, saying, “It is a ghost!” And they cried out for fear.
But immediately Jesus spoke to them, saying, “Be of good cheer! It is I; do not be afraid.”
And Peter answered Him and said, “Lord, if it is You, command me to come to You on the water.”
So He said, “Come.” And when Peter had come down out of the boat, he walked on the water to go to Jesus. But when he saw that the wind was boisterous, he was afraid; and beginning to sink he cried out, saying, “Lord, save me!”
And immediately Jesus stretched out His hand and caught him, and said to him, “O you of little faith, why did you doubt?” And when they got into the boat, the wind ceased.
Then those who were in the boat came and worshiped Him, saying, “Truly You are the Son of God.”

•  God is Bigger than all my Problems