Skip to content
Home > Thoughts by Women > Our Potential 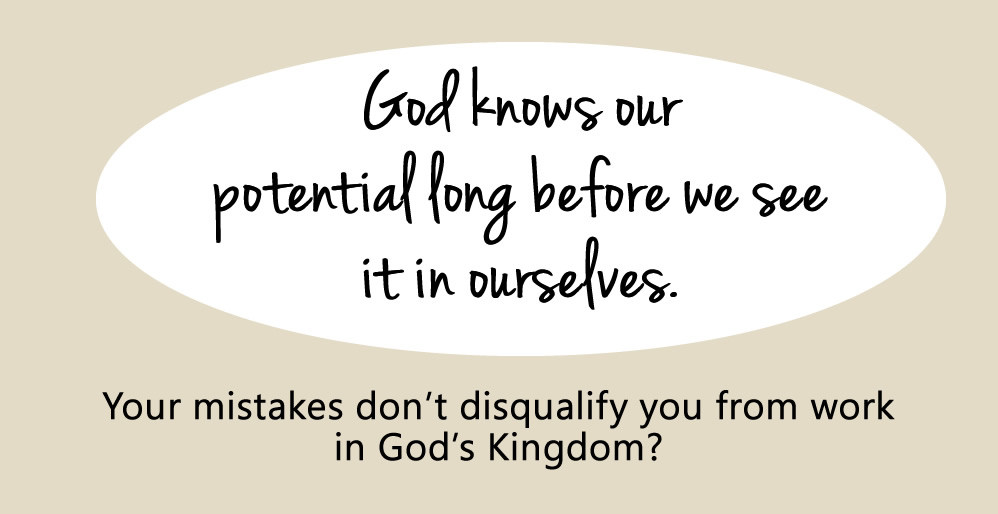 Have you ever really messed up?

Maybe it was a mistake or a poor choice, but it was something so big you didn’t see a way to come back from it. I imagine we all have.

Jesus’ disciple, Peter, might have wondered the same thing. On the night Jesus was arrested, Peter denied knowing Him, not once, not twice, but three times. That’s a big thing to come back from and Peter probably didn’t see a way for that to happen.

Jesus doesn’t just know who we are now, but who we can become through Him.

Jesus knows we’re going to fail and make major mistakes, but He also knows these are opportunities for growth in our faith, and in who we are becoming. Jesus knows our potential.
Jesus knew Peter would mess up by denying Him, and yet, he told Peter,
So I will call you Peter, which means “a rock.” On this rock I will build my church, and death itself will not have any power over it. Matthew 16:18 CEV
Wow. Jesus knew Peter would be the foundation of His church, even while he knew the mistakes Peter would make.
Peter came back from his betrayal. Not because of something he did, but because of who God is.

The women went into the tomb, and on the right side they saw a young man in a white robe sitting there. They were alarmed. The man said, “Don’t be alarmed! You are looking for Jesus from Nazareth, who was nailed to a cross. God has raised him to life, and he isn’t here. You can see the place where they put his body. Now go and tell his disciples, and especially Peter, that he will go ahead of you to Galilee. You will see him there, just as he told you.” Mark 16:5-7 CEV

Especially Peter. He wanted Peter to know that He had not turned away from him. Peter’s betrayal was not too much to come back from.

Perhaps God is whispering to you today, especially you.
What choices or mistakes are keeping you from Jesus?
God’s forgiveness covers anything we think is just too much. He knows our hearts and hears our confessions. He knows us better than we know ourselves.
God knows who we are and who we can become through Him.

He knows our potential long before we see it in ourselves.

Think your mistakes disqualify you from work in God’s Kingdom? They didn’t for Peter and they don’t for you. Peter looked for Jesus and followed Him. Peter’s mistakes became his testimony of Jesus’ death and resurrection. His story was part of God’s story.

And, whether we realize it yet or not, our stories are all part of God’s love story.

By Laura Rath
Used by Permission

Comments: If you don’t see our response form, please go to https://thoughts-about-god.com/blog/laura-rath_our-potential/