Skip to content
Home > Thoughts by Men > The Map of Life 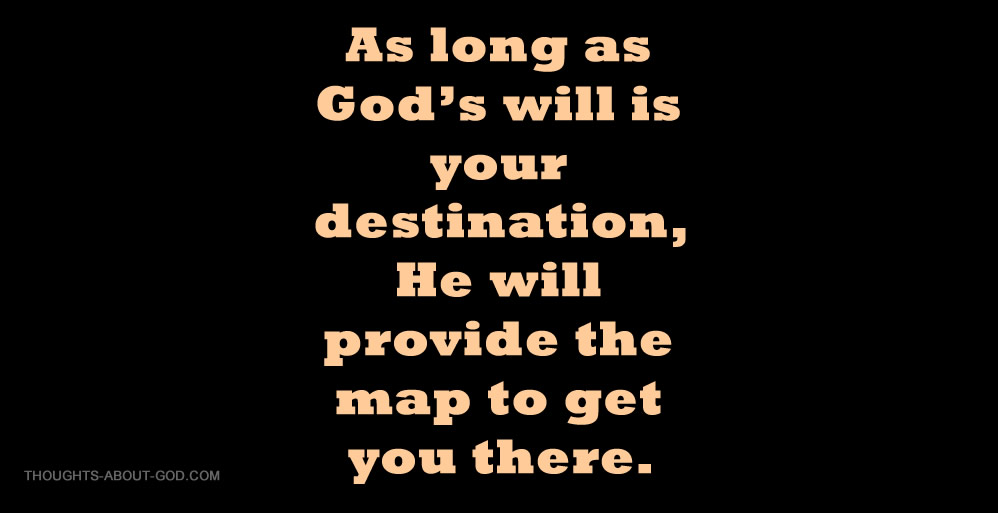 The Map of Life

“They said to Moses, “Was it because there were no graves in Egypt that you brought us to the desert to die? What have you done to us by bringing us out of Egypt?” Exodus 14:11

Being the naturally organized person I am, I tend to be a planner, planning as much as I can as far ahead as I can and getting irritated with anything that gets in the way. So it was only natural recently when I was planning a trip that after getting my airline ticket on-line, I mapped out the ground plan.

I was flying into a major city airport at afternoon rush hour that was exactly on the opposite side of town from my hotel. Not wanting to take the time and expense of a cab ride, I checked the train schedule and found out I could get on at the airport and off near my hotel. I then got an on-line map from the train station to the hotel and found it to be less than a mile straight down a well traveled road and then three blocks on another street. I decided I could walk and get some evening exercise.

Initially, all went as planned….. off the plane onto the train and then off at the station. I walked past three perfectly good waiting cabs and proceeded down the road. It was dark by then, but the sidewalks were wide and the lighting good. Then, about a half mile into it, the sidewalks ceased, as did the lighting. It was then I realized I had to walk under an Interstate highway the banks of which were covered with heavy underbrush.

So, there I was, walking on the highway in the dark, wearing a dark suit, pulling my luggage and wondering how many pair of eyes were looking at me from the underbrush like sharks eying a mackerel. Would I get run over or mugged? At least I had voted before I left.

Then, the road forked and I went the wrong way. Finally, after walking a couple of miles in a circuitous route, I found my hotel and wondered if those cabs were still waiting at the train station. It looked so easy and short on the map.

When our children were small, we would use each trip as a geography lesson and show them our journey on a map. It looked so short. Maybe that’s why they would say about an hour into the trip “Daddy are we there yet?”

The map of life is like that. Our plans look so easy on paper, but walking out life’s journeys is quite another story. Look at the journey out of Egypt when the people asked Moses if he brought them into the desert to die.

The key is that we have a map and in order to do that, we have to have a specific destination. If you don’t know where you are going, any road will get you there.

I’m amazed that so often when I think I know where I’m going God shows me I’m absolutely wrong.  Certainly I do wander off of the path every once in a while, but God brings me back to that path again and again.  He is faithful in doing this no matter how far I stray.

As long as God’s will is your destination, He will provide the map to get you there, so follow His map for your life and enjoy the journey.


Comments: If you don’t see our response form, please go to https://thoughts-about-god.com/blog/john-grant_map-of-life/