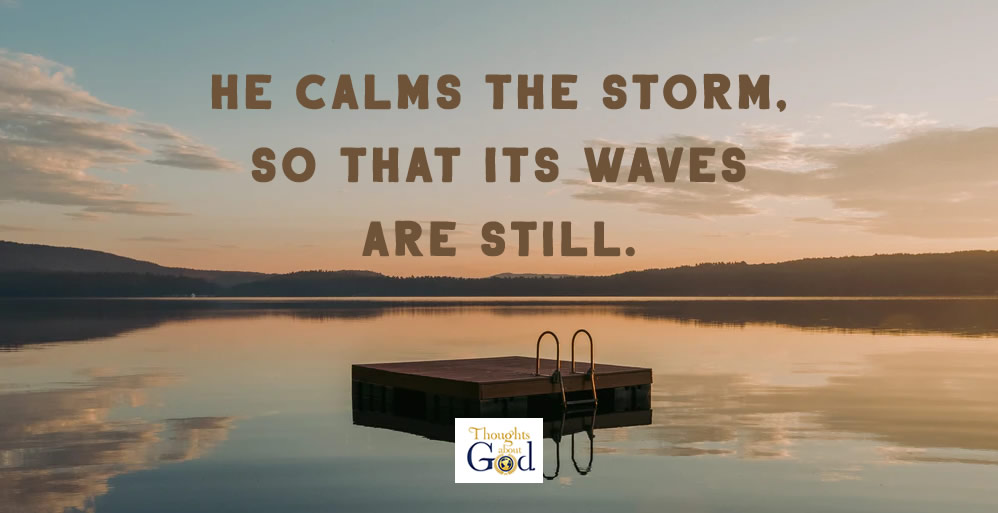 Everyone experiences storms in life—occasions that bring pain, suffering, or loss. It’s in turbulent times that all sorts of questions come to mind: Where is God? Why has this happened? Was it something I did? Did God cause it, and if so, why? When we find ourselves in tumultuous times, the safest place to go for answers is God’s Word.

The literal tempest described in today’s passage provides insight regarding the Lord’s role in the various upheavals we face. According to Psalm 107:25  God was responsible for this storm, as He was the one who raised the winds and waves that frightened the sailors.

Sometimes the Lord interrupts our life by sending turbulence so we will do what those sailors did—in their misery and helplessness, they cried for God’s help. He then brought them out of their distress by calming the storm and guiding them to a safe haven. In response, they thanked the Lord for His loving kindness and wondrous deliverance and praised Him to other people.

There’s nothing like the sense of relief that comes when a storm is past. But let’s not forget to respond like those grateful sailors.

Psalm 107:23-32
23 Those who go down to the sea in ships, Who do business on great waters,
24 They see the works of the Lord, And His wonders in the deep.
25 For He commands and raises the stormy wind, Which lifts up the waves of the sea.
26 They mount up to the heavens, They go down again to the depths;
Their soul melts because of trouble.
27 They reel to and fro, and stagger like a drunken man, And]are at their wits’ end.
28 Then they cry out to the Lord in their trouble, And He brings them out of their distresses.
29 He calms the storm, So that its waves are still.
30 Then they are glad because they are quiet; So He guides them to their desired haven.
31 Oh, that men would give thanks to the Lord for His goodness, And for His wonderful works to the children of men!
32 Let them exalt Him also in the assembly of the people, And praise Him in the company of the elders.

How to have a “Quiet Time”

HE IS! – a powerful poem about God