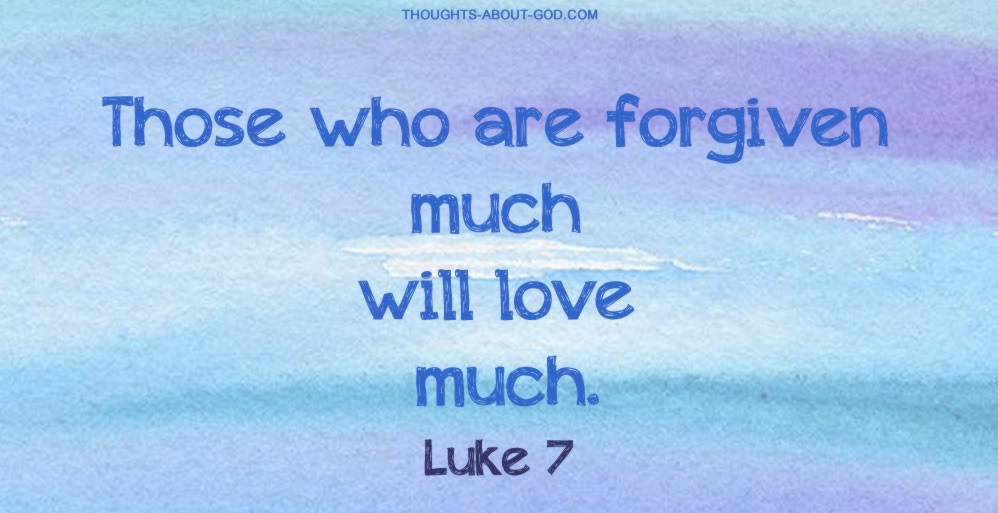 Those who are forgiven much will love much.

“For if you forgive other people when they sin against you, your heavenly Father will also forgive you. Matthew 6:14

She wasn’t asked to come.

Sometime in the past, she’d been broken.  And she received His forgiveness.
Now, in His presence, she couldn’t hold back the tears, or continue to stand behind Him.

She fell at His feet and wept.   Enough tears to wash His feet.
But she didn’t just wash His feet.   She wiped them with her hair.
And, with overwhelming emotion, she began kissing His feet.  And didn’t stop.
Then, she brought out her alabaster box and anointed His feet with a costly ointment.

This is what it looks like to be forgiven.

But her actions weren’t welcome by the host – a Pharisee.
Known for distancing himself from sin.  Known as the religious elite.
He thought he was on equal footing with Christ.

But he didn’t love Christ.
He didn’t treat Him as a guest of honor in his own home. Or show the most common courtesies.
And he accused Him of ignorance.  Surely He didn’t know who was touching Him!

One was ten times the amount of the other.
But neither could pay their debt.

One debt was great and the other was small.
But neither had enough resources to pay.

So the creditor forgave them both.
They were both forgiven.
Freed from their debt.

Still having to be paid, their debt became His.

And he paid it all.

The main lesson of the parable came from Simon’s own lips.  He who has been forgiven the most will love the most.

Suddenly, Jesus looked at the woman.
Still speaking to Simon, He pointed to the love this forgiven sinner had been showing Him, in contrast to what Simon had failed to do.

This is what it looks like to be forgiven.

It frees.
It freed this woman from a debt that couldn’t be paid.
It could have freed Simon from hardness toward God and others.

And forgiveness gives freedom to love MUCH.

Simon had said it.  Those who are forgiven much will love much.

And all of us have enough need for forgiveness to make us individuals who can love Christ in a big way.

The measure of our love will be determined by the way we view our sin.

Whether our sin is great or small . . .
NONE of us have enough resources to pay the debt we owe.
ALL of us needed Someone Else to pay it for us.

Our sins are just the huge, great reason to love Him in a big way.

• The Power of Forgiveness | by Dr. Henry Brandt