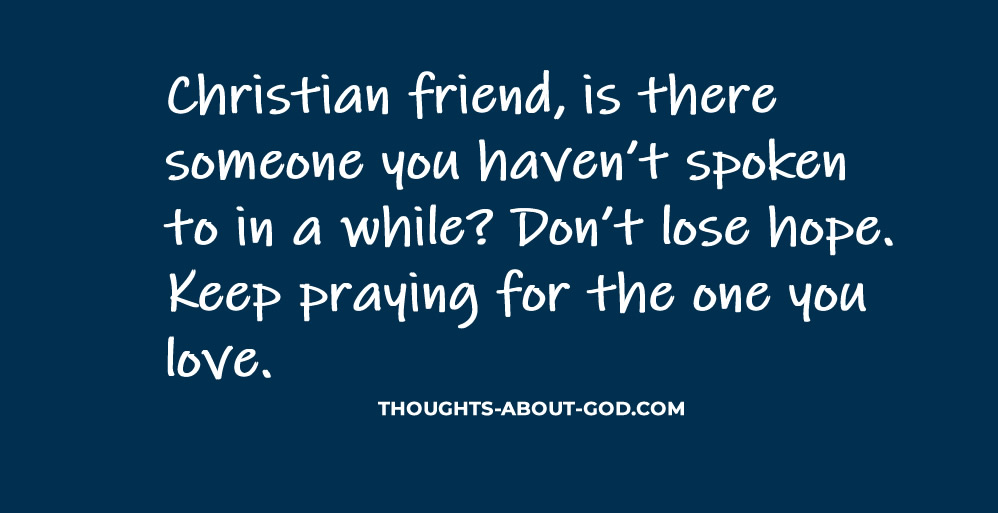 Christian friend, is there someone you haven’t spoken to in a while? Don’t lose hope. Keep praying for the one you love. You might see the whole picture soon.

“They all joined together constantly in prayer, along with the women and Mary the mother of Jesus, and with his brothers.” Acts 1:14

My brother and I hadn’t spoken for a while. At first, my unanswered calls led to confusion. I was sure he was mad at me, but I wanted to talk. Over the months, my other attempts were also met with silence. Anger and resentment filled my heart. I also felt sadness and great loss. Sometimes, there are things we just don’t understand.

Jesus was greatly misunderstood by his siblings. Growing up with the story that your brother didn’t have an earthly father, must have been confusing. I wouldn’t have believed the virgin birth either. It’s also easy to understand resenting a perfect, sinless brother.

At the end, we see anger and bitterness openly manifested when his family tries to take him away from the crowds saying, “He is out of his mind.” Even his own brothers didn’t believe in him (John 7:3-5).

They didn’t have the whole picture yet. Jesus’s deity was veiled. He made himself nothing, being found in appearance as a man. Being equal with God, but not using it to his own advantage, humbling himself, being obedient to death (Philippians 2:6-8). This was God’s plan and would be revealed at the right time.

I’m glad for these words “and with his brothers.” Our Lord was merciful to his brothers. After seeing Jesus taken up with their own eyes, they now understood everything.

Christian friend, is there someone you haven’t spoken to in a while? Don’t lose hope. Keep praying for the one you love. You might see the whole picture soon.

After 2 years, my brother called wanting to get together. I didn’t know the whole story.

Lord Jesus, you do everything well. Even in your humiliation you excel, being gracious and merciful, providing the perfect sacrifice for our sins. We thank you and praise you Lord! Help us to be patient and loving with others even when we don’t understand what is happening.

Entrust any difficult circumstance or relationship that comes to mind to Jesus, trusting him for the wisdom and strength to deal with it according to his will.

By Rich Vega
Used  by Permission

• How to Experience God’s Love and Forgiveness (3 parts)

• The Power of Forgiveness | by Dr. Henry Brandt