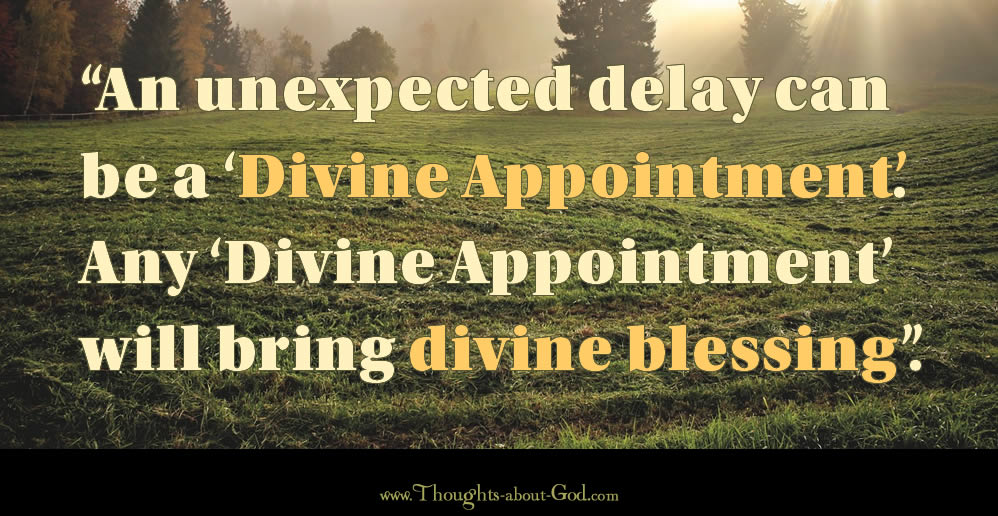 Unexpected Delays May be Divine Appointments 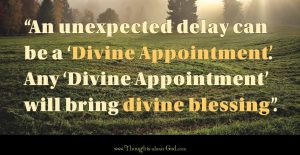 Are you troubled about an answer to a prayer being delayed in your life? Have you almost given up?

No one likes delays. We live in an instant world, filled with instant food, instant noodles, online banking, quick promotions, quick turnovers & rapid solutions. Any delay therefore, is uncomfortable. God however, has his own timing in our lives & he can turn the delays into ‘Divine Appointments’.

In the book of Esther, we read in chapter 2 vs 21-23, about how Mordecai uncovered an assassination plot on Xerxes, the King of a mighty Empire. As he revealed the details of the plot to the King through Esther, the conspirators were apprehended & the King’s life was saved. But, what was Mordecai’s reward? NOTHING! He was forgotten. The only reward he got was that with this incident, his name was recorded in the chronicles of the King (vs 23), an action that would have great significance later. What about you? Do you feel forgotten today?

Mordecai, like any other man I’m sure, would have been rather disappointed. Wouldn’t we, if we had helped save the life of our Nation’s Leader? But, Mordecai kept serving faithfully.

At a later date, when Mordecai was about to be hanged on a large gallows the following day, due to a conspiracy by a wicked official named Haman (5:14), God planned a ‘Divine Appointment‘. It so happened that according to chapter 6:1, the King couldn’t sleep that night (some believe that he couldn’t sleep because the construction of the gallows was creating a loud ding!) Since there was no TV for the King to watch a reality show, no radio to listen to his favorite talk show or no other entertainment available at that time of night, the best thing he could do was to read about his exploits (6:1). The record of his rule was therefore read to him, and as the officials started reading, it was no coincidence that they turned to the story of how Mordecai had saved the King’s life (vs 2). When the King asked what reward Mordecai had received (vs 3), the officials would have replied sheepishly, ‘nothing’.

Immediately, the King planned a rewards scheme for Mordecai (vs 4-11), and of all people, Haman was chosen to do the honors! As a result, not only Mordecai’s life, but the entire Jewish race was eventually saved from possible destruction! The delay had been turned into a ‘Divine Appointment‘ and Mordecai ended up being appointed to the second highest position in the empire (10:3).

Trust God therefore through the delays of your life. You may just be on a verge of a ‘Divine Appointment’.

Prayer – Lord, help me to trust you through the delays in my life. May I have the faith to believe that You will use them to bring about ‘Divine Appointments’. Amen!