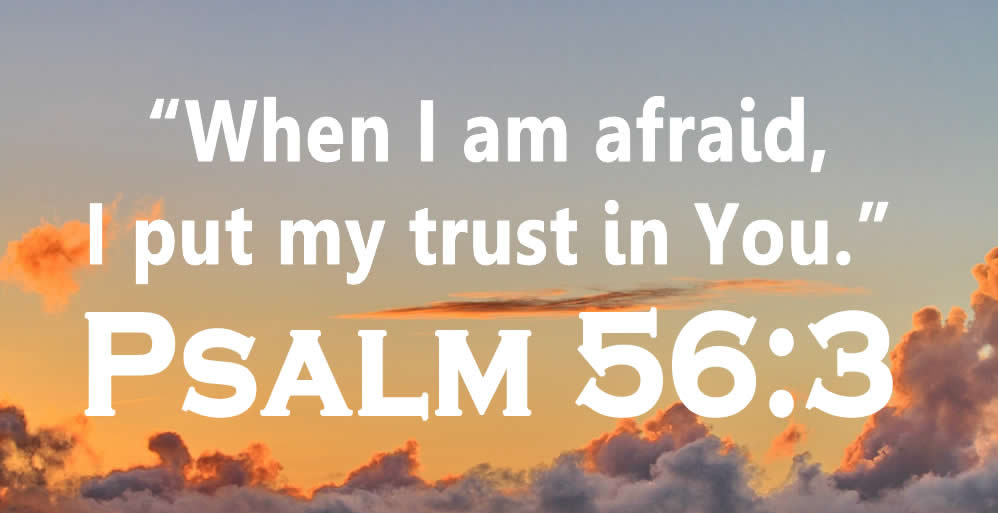 Take Your Cue from Fear and Trust God

I spent the first eight and a half years of my life in the beautiful state of Alaska.  My family lived fifty miles from the nearest town and a mile down a dirt road, off the Alaska Highway.  We had those old crank phones.  We never locked our doors.  About the only thing I feared was coming up on a bear while playing in the woods.  It truly was a wonderful place to grow up!

However, that all changed when we packed up our belongings and moved to California.  We settled into a tiny home on a busy street with cars roaring up and down at all hours of the day and night.  I would awaken in the night, gripped with fear thinking someone had invaded our house only to realize it was just the furnace coming on.

My world was turned upside down.

Fear stalked me like a lion seeking prey, ready to pounce at any moment. It was a paralyzing terror that threatened to overwhelm me, especially in the dark hours of the night.

One day my mom shared a verse with me to encourage me in my struggle and it became my hope.

I would lay in my bed, saying this verse over and over and over.  Hoping that it would magically remove the fear in my heart and let me sleep.  Even though I quoted this verse endlessly, it never quite seemed to work.  My fear was just as palpable as before.

I thought those words were magic.  That if I said them in just the right way, with just the right inflection than my fear would be gone.   I believed that these were the code words to release me from my fear.

I was missing something and that “something” was my action.  It’s not enough just to say the words over and over.  I needed to replace my fear with Trust.  I needed to believe it, act on it, and live it.

A few years ago, I once again, found myself living in world of fear with my children.  I was consumed with anxiety over what they were doing and what they would become.  The more control I took the more out of control I felt.  I was overwhelmed.  In that place of fear, God asked me to surrender them to Him; to let go of the control and trust Him.  As I pried my fingers off the lives of my children and learned to release them to Him, God filled me with His perfect peace.

Over the years, I have had to surrender them over and over to the God who loves them even more than I do.  It hasn’t been easy.  Truthfully, it’s been a lot of hard work because I have a tendency to take them back again and again.  But as I’ve worked on this area of trust, it has gotten easier, and I respond quicker.

Once again, I’m faced with dread as my son heads off to the military.  I can let fear invade my life and stalk me like a lion or I can choose to Trust.

I know that in the upcoming months it will be easy to let fear raise its ugly head in life.  But fear is God’s reminder to me to trust Him.

I no longer need to quote words from the Bible with my fingers crossed hoping that they work.  I choose to take God at His word and trust Him with my children, my life and my salvation.

How about you?  Are you living in a world of fear?

Are you LIVING by trust or by anxiety and worry?

Let fear be your cue to TRUST!

•  He Guides Us
•  God Provides for His Own
•  Salvation Explained