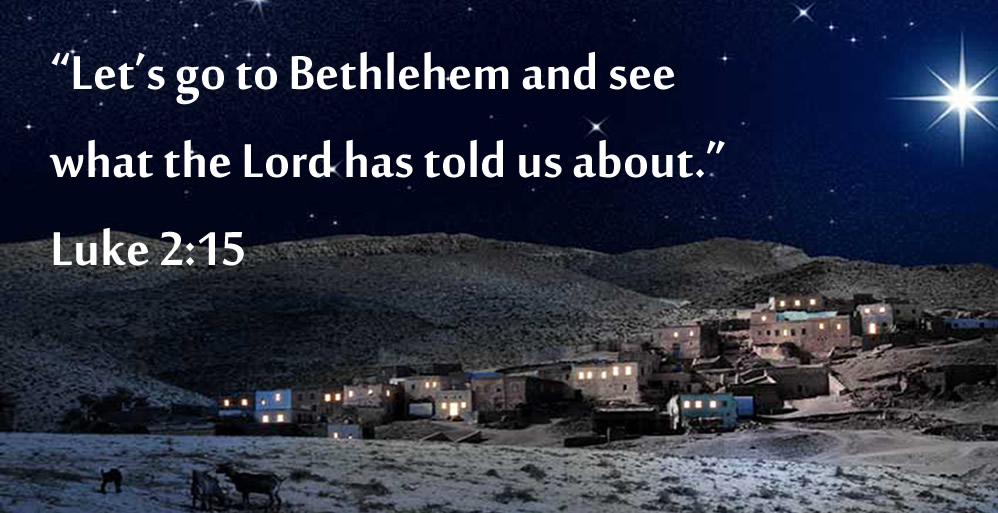 Let Us Go to Bethlehem

“The angels left them and went back to heaven. The shepherds said to each other, “Let’s go to Bethlehem and see what the Lord has told us about.” Luke 2:15

Christmas time is a season when many people are more interested in the present than the past. But, it is the past that Christmas is all about. It started over two millenniums ago with a baby in a manger when God became incarnate in man.

There were shepherds in the fields attending their sheep. They were itinerant in that they had no home and lived a nomadic lifestyle following the green pastures and cool waters, such as they were, in the barren lands around Judea.

Sheep are defenceless animals and the only protection they have comes from their shepherd. Consequently, if left alone to fend for themselves, they are in great danger. On the flip side the only net worth a shepherd had was in his sheep. If he lost them, he lost everything he owned.

One needs to understand this to comprehend the risk and commitment the shepherds made to leave their flocks and journey to Bethlehem. It was more that a casual evening walk to town.

They were minding their own business, keeping watch over their flocks when an angel of the Lord appeared to them, and the glory of the Lord shone around them, and they were terrified. But the angel said to them, “Do not be afraid. I bring you good news that will cause great joy for all the people. Today in the town of David a Savior has been born to you; he is the Messiah, the Lord. This will be a sign to you: You will find a baby wrapped in cloths and lying in a manger.”

When the angels had left them and gone into heaven, the shepherds said to one another, “Let’s go to Bethlehem and see this thing that has happened, which the Lord has told us about.” In (Luke 2:16) we learn that made no delay as they “hurried off” and found Mary and Joseph, and the baby, who was lying in the manger.

How about you this Christmas? Will you be answering the call to the mall, hustling off to buy gifts, thinking of the present or will your thoughts be aimed at Bethlehem of years gone by?

God is calling you to go to Bethlehem to see the Jesus of whom the angels spoke. No, he is not still in a feeding trough and you don’t have to literally travel to Bethlehem, but through His Word you can follow the star and find Jesus.

The shepherds left with no delay and in full obedience to find the Lord of heaven. They left everything of worth and let the sheep fend for themselves. Have you been putting off this going to Bethlehem? Have you not wanted to risk losing what you have to make the journey? Are you delaying to not risk what you cannot keep for the sake of missing that which you cannot lose?

So let’s all celebrate the season by focusing not on the presents but rather on the Lord of the manger. Let’s all go to Bethlehem this Christmas.


Comments: If you don’t see our response form, please go to https://thoughts-about-god.com/blog/john-grant_go-to-bethlehem/