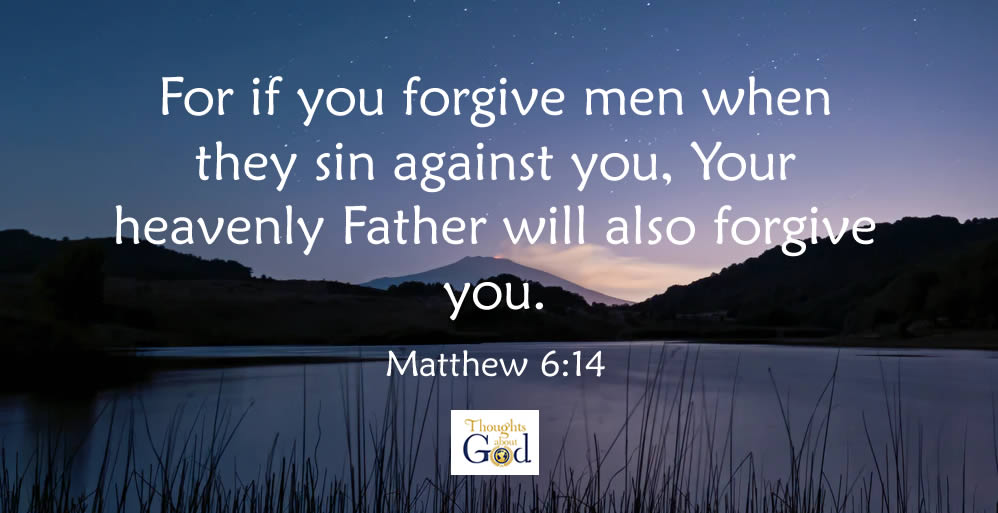 “If you forgive those who sin against you, your heavenly Father will forgive you. But if you refuse to forgive others, your Father will not forgive your sins.” Matthew 6: 14, 15 (LAB)

I’ve pondered these verses. God’s forgiveness of our sins seems to hinge on how we forgive others. Why is this so important?

Unless we forgive we let bitterness control us. Bitterness is like a plug between me and God; between me and another person. Unless I pull the plug, His forgiveness and love cannot flow. There is no receiving without giving. As we give, it is given unto us. We just cannot have forgiveness in any other way, because that is the way life works.

Forgiveness is a decision we make not based on feeling.

During the Second World War, Corrie ten Boom had suffered much in a concentration camp. Her father and sister did not survive the brutal treatment. By some fluke, Corrie was released. She spent the rest of her life proclaiming the message of God’s love and forgiveness.

One day after she’d spoken in a small church in Germany, she was at the door shaking hands. A man came down the aisle who looked strangely familiar. With a jolt, Corrie recognized him: he’d been one of the guards at the concentration camp.

“I can’t shake his hand,” Corrie thought, frantically looking for a way of escape.

“Forgive him as I have forgiven you,” Jesus whispered.

“Jesus. Would you do it through me,” she whispered as she lifted her hand.

And with that act, Corrie was free. Free to be the person God wanted her to be.

Dear Jesus, take over my heart so that I will see people as you see them and forgive them as you forgive them.

By Helen Lescheid
Used by Permission

God is Thinking about You
God’s Mysterious Ways