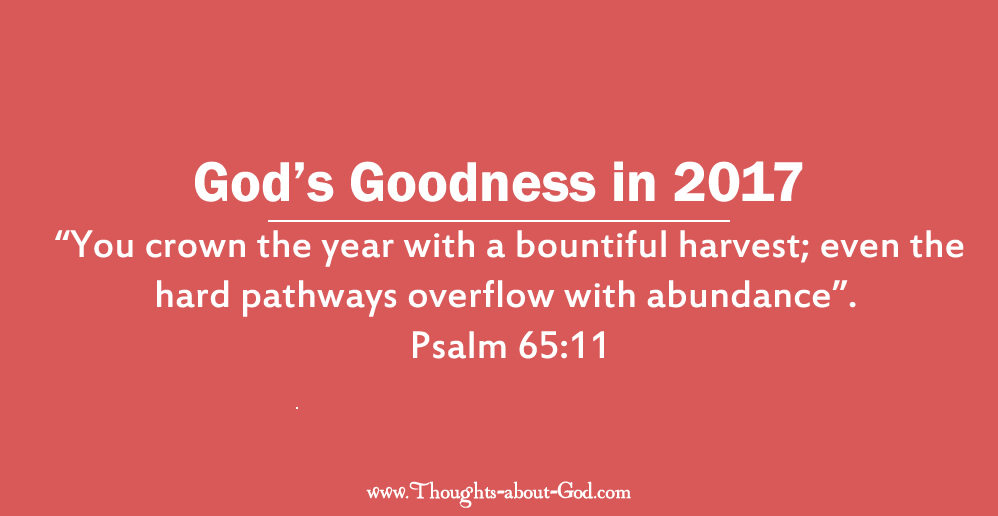 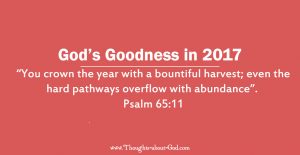 “You crown the year with a bountiful harvest; even the hard pathways overflow with abundance”. Psalm 65:11 (NLT)

What a powerful verse!!

As the New Year begins, we may be reflecting on what happened in the past 12 months. Some will have powerful testimonies while others will remember their challenges. Some would say, ‘It was my best year’, while others may say, ‘it could have been better’. Here are a few memories that went through my mind.

• I remembered a year when I ended up in hospital on January 2nd, due to a severe asthmatic condition

• I vividly remembered December 26th, 2004, when a deadly Tsunami devastated the coastline of my beloved country, Sri Lanka.

• I also remembered the end of one particularly disappointing year when Johnny Logan’s song “What’s Another Year?” seemed to be a perfect anthem for me for the year ahead!!!

Psalm 65 is considered a National Psalm of praise to God for His goodness. It was apparently sung after the spring rains came in to water and refresh the earth. The song became even more meaningful if the Nation had been through a dry season. Let’s look at what this Psalm tells us about God’s goodness.

1)    God’s Goodness Crowns the Year with a Bountiful Harvest

A crown is a special and glittering insignia worn by Kings, Queens, Emperors & other royalty. A crown or something that resembled it, was given to the winners of sporting events in Biblical times, and the winner in present-day beauty contests is also given a crown. We crown people with titles like King of Rock and Roll (Elvis Presley), and King of Pop (Michael Jackson).

A man of God said, ‘You may lack the fastest, the finest and the latest, but you will never lack what is needed’!!

“Even the hard pathways overflow with abundance”.

No doubt, we will have to face some, if not many ‘hard pathways’ in the coming year. It’s part of life. But, the Psalmist says, “Even the hard pathways overflow with abundance”. This statement, when looked at in the agricultural setting in which it was written, speaks about the ‘dry’ pathways being made fertile after the rains.

Maybe the past year has been a ‘dry season’ for you; for your ministry. If so, believe now that you will see God’s abundance overflowing in the ‘hard pathways’ in the New Year!
‘If God takes us on stony paths, He will fix us with strong shoes’!!

ILLUSTRATION – Right now, I remember 2013. It was a challenging year for us from a health perspective. First, to my dismay, I found that the Retina on my left eye had torn, which meant that I had to go through 2 serious surgeries in the space of 3 months. It was truly a ‘hard pathway’. A few months later, my wife was hospitalized with Dengue Fever with her condition being quite scary for a few days. Thank God, He brought us through those challenges and we experienced His goodness and favor in the midst of the ‘hard pathways’.

As we prepare our hearts to see Psalm 65:11 fulfilled in the year ahead, let’s remember that we need to give the Lord Jesus the first place in every area of our life. Here’s something I gleaned off a bulletin.

‘To achieve spiritual success, do not forget to give God the first hour of the day, the first day of the week, the first part of every paycheck, the first consideration in every decision, and the first place in your heart.’ – That’s a great way to start and to live through the year ahead!!

May you receive God’s crown of goodness and a bountiful harvest in the New Year, and may you see His abundance overflowing in the hard pathways. Have a blessed and Christ-filled 2017!!

Comments are welcome – click on the Title (email readers)

Would you take just a moment to prayerfully consider sending this to two friends who might be blessed by what we’ve shared today?
If you received this issue from a friend, you can join our list at www.thoughts-about-god.com/blog/