Things are not Always as they Appear

Last week, the â€œtrail bossâ€? of our church motorcycle group organized a ride to a place called â€œSpook Hill,â€? where it appears that vehicles defy the law of gravity and roll uphill. In reality, it is an optical illusion that makes it look like an uphill roll, but the law of gravity has not yet been repealed and objects still roll downhill, no matter what ancient spirits may allegedly be lurking around.

We had a good time, but on the ride back, I couldnâ€™t help but draw a spiritual comparison to our visit. Satan often disguises that which is bad to appear as good. The enemy often tries to portray himself as good, a friend who cares for you or as truth.Â

That is not the case though, Peter said â€œyour adversary the devil, as a roaring lion, walks about seeking whom he may devourâ€?.Â  He lays traps and waits for you to fall.Â  He is after the result and may work on traps that take years to develop in your life when he can rise up and pounce on you.Â

No need to fear though as God says â€œGreater is He who is in your than he that is in the worldâ€?.Â  God will take care of it if you let Him. But, we must know the source and not trust what we see or feel in a worldly sense.

We always need to be on alert and use caution.Â  Things are not always as they appear.Â  At times we can allow what we find desirable to overshadow and hide the truth we do not want to see that is in details.Â  If we are not careful, we will only see what we want to see.

Other times, we may find something or someone that appears to be good only to find out later that we were deceived.Â  We often are not aware of all the facts or know the end result.

The real question is whether we see things with worldly eyesâ€¦â€¦. eyes conditioned by the educational system, the media, the entertainment industry and others that would mould our minds to be unlike the mind of Christ or with spiritual eyes, the way God sees things.

How do I acquire spiritual eyes? I do it by constantly worshiping God throughout my daily routine, by being in the Word daily, by regularly participating in public worship and Bible fellowship with other Christians.

Mold your eyes, your mind and your perspective to be like that of Jesus and you will have the spiritual eyes to see as He sees, no matter how deceptive things may be from a non-Biblical world view.Â
(a thought on life from John Grant )
Â

You can comment on this devotional online at:
https://thoughts-about-god.com/blog/2009/05/19/jg_appear/
Not to be reprinted without permission 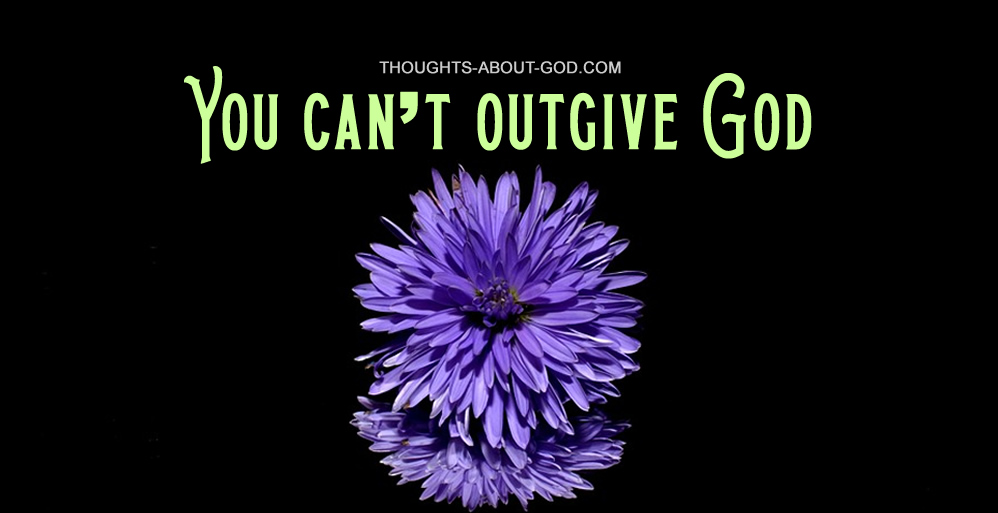 “For if you give, you will get! Your gift will return to you in full and overflowing measure, pressed down, shaken together to make room for more, and running over. Whatever measure you use to give – large or small – will be used to measure what is given back to you“ Luke 6:38

R.G. Le Tourneau was one of God’s great businessmen. He wrote a book, entitled, God Runs My Business. Though he had little formal training, he became one of America’s leading industrialists, developing and securing patents for many major improvements in earth-moving equipment. He gave away millions of dollars, and he founded a wonderful Christian college which bears his name. I had known and admired him for many years, but one of my most memorable experiences with him was at his plant in Longview, Texas. As we chatted, I was captivated by this exuberant, joyful layman who was overflowing with the love of God, still creative in his later years, and always proclaiming the truth that you cannot outgive God – the more you give away the more you receive. He had discovered a law of the universe.

The giving of the tithe (ten percent of our increase) is an Old Testament principle. The New Testament principle of giving is expressed in this passage: “The more you give, the more you will receive.” I personally do not believe that that involves indiscriminate giving, but rather that we should prayerfully evaluate all the various opportunities that are available to further the cause of Christ and His kingdom.

New Testament concept makes clear that everything belongs to God. We are custodians, stewards, of that which is entrusted to us for only a brief moment of time. Three-score and ten years (or possibly a little more), and then all that we possess will pass on to another. We are not to hoard, nor are we to pass on large estates to our heirs. That which is entrusted to God’s children is given to them to be used while they are still alive. We are to care for our own, and make provision for their needs, but all that is entrusted to us beyond that amount should be spent while we are still alive, while we can guarantee proper stewardship.

Today’s Action Point: Mindful of this spiritual principle, that everything belongs to God and He has entrusted me with the privilege and responsibility of being a good steward, I will seek every opportunity to invest all the time, talent and treasure available to me while I am still alive, for the enhancement of the kingdom of God.

Comments: If you don’t see our response form, please go to https://thoughts-about-god.com/blog/bill-bright_outgive/