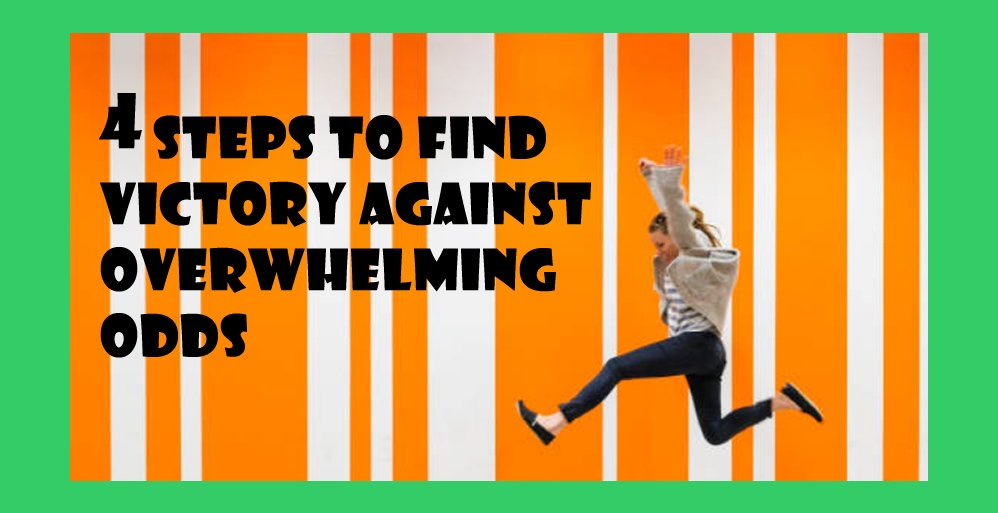 This past week I’ve had to pray with people battling heavy odds against cancer, children’s health issues, relationship problems, addictions, emotional distress, a burnt down house and many other issues. They all felt overwhelmed and that the odds were stacked against them.  Are you too struggling against overwhelming odds today?

In 2 Chronicles 20, a coalition of armies had come against Judah. This strong army (verse 2-4) brought a sense of terror upon the people.  King Jehoshaphat realizing the seriousness of the challenge before him, cried in desperation, “We have no power to face this vast army… We do not know what to do…” (verse 12). Maybe you too are saying ‘I don’t know what to do’?

However, God brought about an amazing victory for Judah. We can therefore learn how to find victory against overwhelming odds by looking at 4 responses shown by King Jehoshaphat.

Prayer is the greatest weapon God’s children have over every challenge. A famous quote by Alfred Lord Tennyson says, “More things are wrought by prayer than this world dreams of.” So, when facing overwhelming odds and when you may not even feel like praying, there is only one thing to do. Keep on praying!

Jehoshaphat inquired of the Lord and proclaimed a fast throughout the land. The people responded in unison as the King cried out to God (verse 3-5). He was depending completely on God’s strength!! (verse 6-12).

God sometimes permits staggering odds to come against us to drive us to our knees in prayer.

Verse 14 – 15 tells us that the Prophet Jahaziel, under the anointing of God’s Spirit, began to prophesy over the situation. He said, “Do not be afraid or discouraged because of this vast army. … stand firm and see the deliverance the Lord will give you”.

Similarly, God has a specific promise for every challenge we face; especially when overwhelming odds are against us.  It can come through a scripture, a song, a sermon, a prayer, wise counsel or a prophecy.  Once we receive such a specific word from God, we should hold on to it and not give up till the victory is final (refer verse 20).

The Prophet Jahaziel said, “You will not have to fight this battle… Stand firm and see the deliverance the Lord will give you,…”. He further emphasized “the battle is not yours, but God’s” (verse 15 –17)).  Therefore, realize that the Lord is always fighting on your behalf.

So often I hear powerful testimonies of people who have experienced God’s delivering power in challenging situations.

When the army went out for battle the following morning, Jehoshaphat “appointed men to sing to the Lord and to praise Him for the splendor of His holiness (verse 21).” These singers were focusing on a well- known worship refrain about God’s enduring love. They sang, “Give thanks to the Lord, for His love endures forever (verse 21).”

In response, the Lord brought disarray to the enemy’s camp. Their armies began to annihilate each other and an amazing victory unfolded (verse 22-23)!! As you stand against overwhelming odds, meditate on God’s unfailing love which endures forever. He will come through for you, often in unexpected ways!

God will surely give us victory against the overwhelming odds that are against us today.

Comments: If you don’t see our response form, please go to https://thoughts-about-god.com/blog/p-j_4-steps-victory/