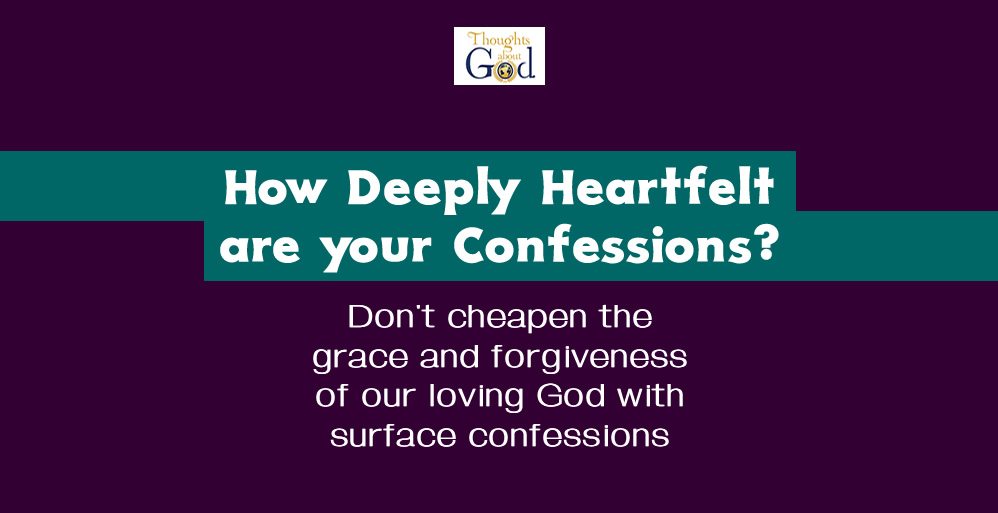 Confession Is Good for the Soul

“Confess your sins to each other and pray for each other so that you may be healed.” James 5:16

While discussing the importance of confessing “one to another,” a friend said, “I always feel better after I’ve confessed.” Because I do not always experience such relief, I wondered if perhaps her brand of confession was more spiritual than my own. Many years ago another friend described his own post-confession reaction: “Confession was so horrific and shameful that I never want to go through that sin…or the confession again!”

The psalmist doesn’t say that he confessed his iniquity so that he would feel good. It seems rather that after confession, the nature of his sin—though forgiven—still deeply troubled him. Christians know and bask in the amazing truth that “there is now no condemnation for those who are in Christ Jesus,” but that does not mean we should not look deeply into the horror of sin or the reasons behind sinful actions. We should not berate ourselves unnecessarily or remain in the “slough of despond,” but it is far too easy to cheapen the grace and forgiveness of our loving God by surface confession with a subsequent sigh of relief that all is well.

While Jesus graciously forgave Peter his heartbreaking denial, it is interesting that there on the beach near the embers of a fire, the conversation that concluded with a world changing job description for the disciple, Jesus lingers, asking three times, “Do you love me?” Peter’s soul is revealed when the writer records, “Peter was hurt because Jesus asked him the third time…”

Confession, while necessary, may not always bring the instant relief we desire but God is faithful to forgive and bring His healing.

• How to be Saved
• Aphids and Sin – an interesting comparison