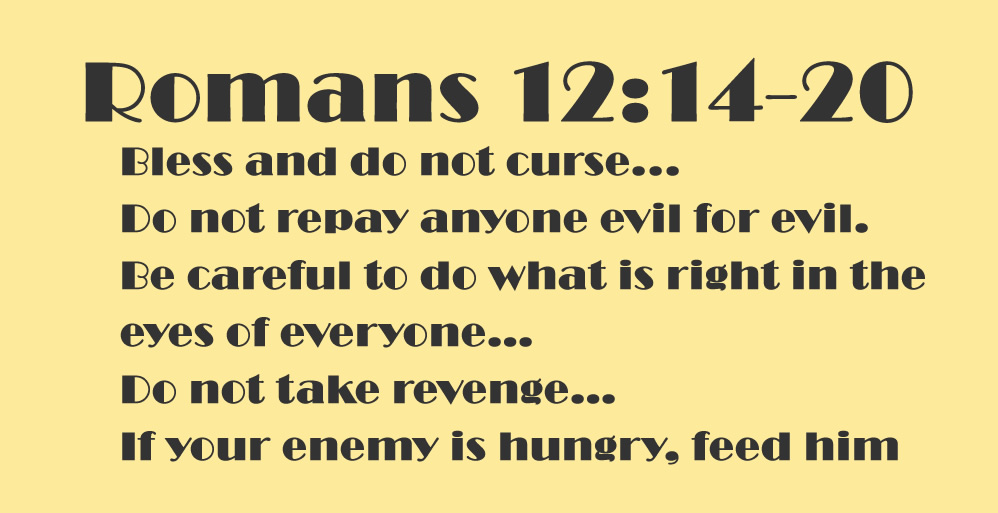 “Bless those who persecute you; bless and do not curse… Do not repay anyone evil for evil. Be careful to do what is right in the eyes of everyone… Do not take revenge… If your enemy is hungry, feed him; if he is thirsty, give him something to drink...”  Romans 12:14-20

Civility seems like such a meager word. At its very least it means politeness or courtesy. It’s what we expect from children as we train them to say “please” and “thank you.”

Several years ago, Doctors Guy and Heidi Burgess, Co-Directors of the Conflict Research Consortium at the University of Colorado wrote, “Clearly, civility has to mean something more than mere politeness. The movement will have accomplished little if all it does is get people to say, “excuse me please“, while they (figuratively) stab you in the back. Civility also cannot mean “roll over and play dead.”

Jesus calls Christians to words and actions that go far beyond civility, even civility as described by the Burgesses. His call is life altering, indeed it is death to self. His standard for speech and lifestyle requires far more than a weekend retreat where opposing sides practice diplomatic debate. Jesus calls for authenticity along with vulnerability. When two of Jesus’ disciples wanted to defend their much loved Savior (“Lord, do you want us to call fire down from heaven to destroy them?”), He rebuked them.

To be sure, civility does not mean Christians never disagree among themselves or with others. The Apostle Paul puts it quite succinctly, “Speak the truth in love.” (Ephesians 4:15). But it would be profitable if Christians—when speaking the truth—would measure their words against the guidelines given to First Century Christians who lived in a hostile world.

By Marilyn Ehle
used by permission

Comments: If you don’t see our response form, please go to https://thoughts-about-god.com/blog/marilyn-ehle_christian-civility/