Skip to content
Home > Thoughts by Women > The Treasure Box 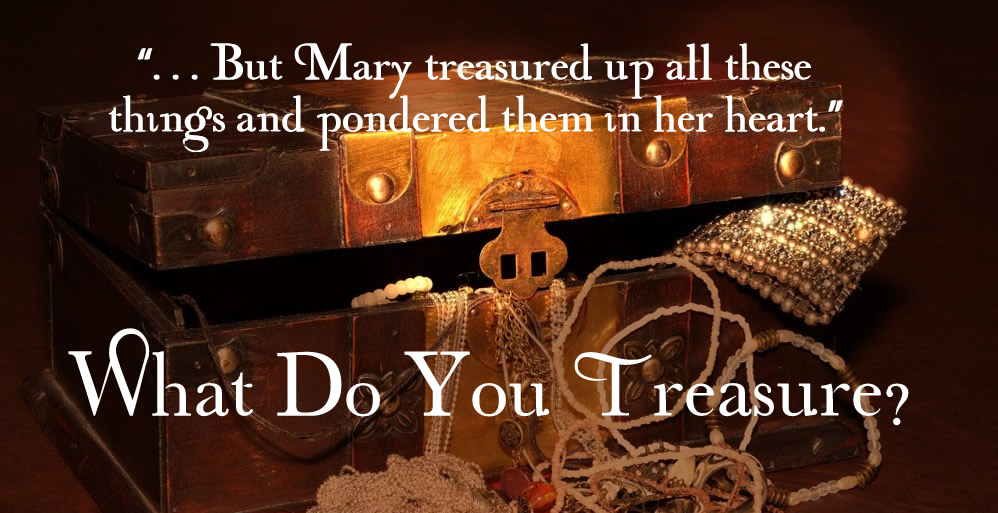 Did you have a treasure box growing up?

I did.  In my treasure box (I actually still have the box) I had a very old dollar coin that my Mom had given to me, some chap stick  (I pretended that it was lipstick, since I couldn’t wear any yet), and various other items that you would’ve considered junk but to me were valued possessions.

In Luke 2:19 (NLV) we get the idea that Mary had a treasure box of sorts, only her treasures were memories of Jesus and how his life intersected with hers.  Look at what it says,

“. . . But Mary treasured up all these things and pondered them in her heart.”

What were those things she stored in her “treasure box”?  Could it have been the time when the Angel came to tell her that she would bear a child even though she was a virgin?  Or what about when she visited with Elizabeth who was old, wrinkled and very pregnant?  Did she treasure watching God’s miracle growing within her.

Did she hold tightly to the feeling of having the baby move inside of her?  Was one of her treasured memories when she laid her precious baby in the manger, as she counted his fingers and toes?  Or what about the surprising visit from a group of homeless shepherds or the royal wise men who had traveled so far from a distant country to visit her son and give him precious gifts?

And as Jesus grew older, I wonder if she included in her box the time when they had to go back to Jerusalem to find Jesus.   Did she have in her box their surprise at finding him teaching the leaders of that day in the synagogue?  And what about the time when He changed the water at the wedding into wine?

I think Mary continued to store up memories of God’s amazing work and power in their lives.  And I can’t help but wonder that if in the years to come, this treasure box of memories was a comfort and joy to her as her life began to turn upside down as she watched her Son become hated and hunted by the Jewish community.

I wonder when she was discouraged or confused, if she would “pull them out” and be reminded that God was in control. Did she seek consolation in those memories, that God had a plan and He was working it out, even though she didn’t comprehend it?

Have you ever created a treasure box of answered prayers?

Have you ever taken time to reflect on God’s work in your life?

I hope that you will take time this Christmas season to reflect on God’s goodness to you and I encourage you to continue to mark those times in your life when you have seen Him and ponder often on them, just as Mary did.

Comments: If you don’t see our response form, please go to https://thoughts-about-god.com/blog/kristi-huseby_treasure-box/