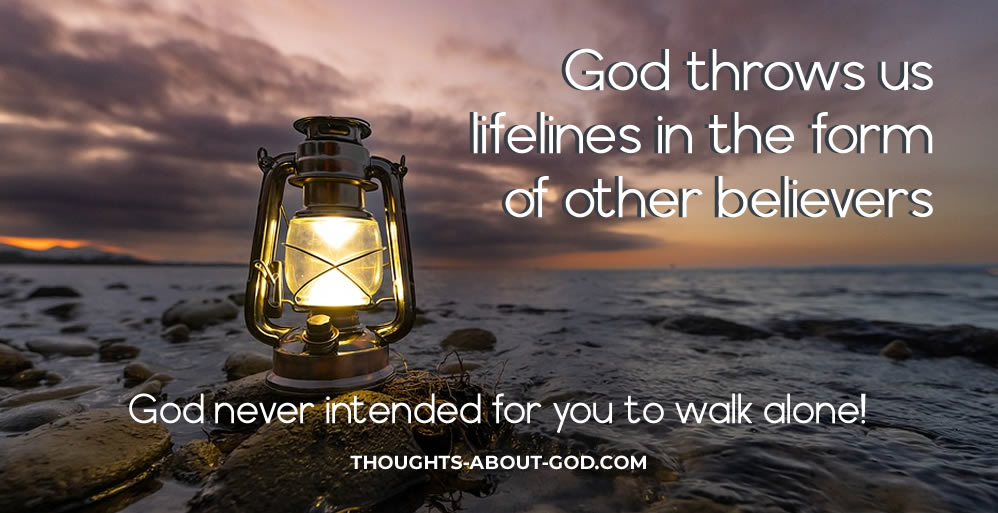 God throws us lifelines as well . . .  in the form of other believers. Remember, God never intended for you to walk alone!

The angel answered, “The Holy Spirit will come on you, and the power of the Most High will overshadow you. So the holy one to be born will be called the Son of God.  Even Elizabeth your relative is going to have a child in her old age, and she who was said to be unable to conceive is in her sixth month.  For no word from God will ever fail.”  Luke 1.35-37 (NIV)

Have you ever speculated what it must have been like for Mary to have an angel tell her that she was going to have a baby?

I wonder if Mary felt like she’d stepped into the twilight zone.  One day she is going about her normal teenage duties and the next she’s had an encounter with an angel that will change the course of her life forever!

In the blink of an eye, an angel’s appearance, a few shocking words and her world was turned upside down.

Did Mary replay the angel’s conversation in her head over and over?  Did she press her hand against her stomach and wonder if there was a life already inside of her?  Did she rehearse what she would say to her parents when they discovered that she was pregnant?  Did she wonder if she had really had a conversation with an angel or if she was just going crazy?

In the midst of her questions, did it dawn on her that someone else was in a similar unexpected situation?  Could it be that was the reason why the angel had told her about Elizabeth?

God knew that Mary needed a friend, someone who knew and understood, with no explanations needed.  He knew she needed validation, someone to affirm what God had said to her, so he sent her to Elizabeth.  He gave her a lifeline in her world of upheaval and change.

God throws us lifelines as well . . .  in the form of other believers.  But do we grab onto them or set them aside because it feels too risky.  We’re too afraid.

He created us to need each other, to find support and encouragement, validation and care.  It’s God’s design.  Friendships can be messy, difficult and challenging but they’re worth the risk.

Remember, God never intended for you to walk alone!

Heavenly Father, Relationships can be hard, disappointing and difficult.  I find it easier to withdraw and go it alone but that’s not Your desire for me.  Help me to see beyond myself, to reach out and take the risk because it’s Your plan for me and I trust You. Amen.