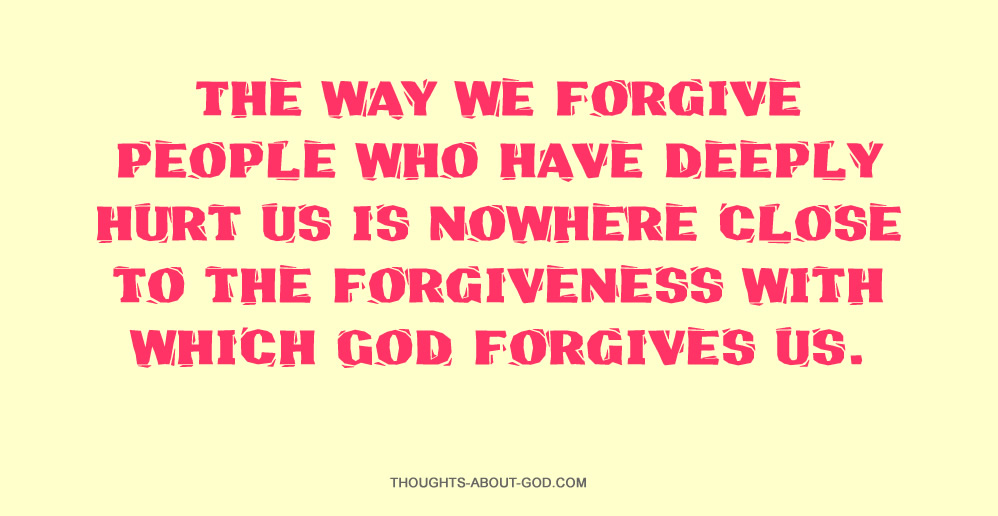 I do not write this lightly, I’ve lived it and learned (slowly at times) that the way we forgive people who have deeply hurt us is nowhere close to the forgiveness with which God forgives us.

As I have repeatedly read the story of Joseph’s reconciliation (Genesis 37-50) with his brothers, I have been moved each time by the deep compassion and mercy he extended to his brothers. He taught us a valuable and beautiful lesson on forgiveness.

We don’t know how long it took him to reach that level of forgiveness after his brothers plotted to murder him, tossed him into a pit, and then sold him into slavery. In my personal opinion, I doubt it was early on because the hurt was so fresh and deep at that time. Maybe it was a work God accomplished in his heart through a slow and gradual process over the many years he was falsely imprisoned.

Maybe it was when he was released from prison and saw the enormous responsibility and position God had placed him in. Maybe his heart was opened then to a deeper understanding of God’s ways, as He learned God’s assignment for him was to save the people from famine.

Whenever it was that the healing work of forgiveness took place in Joseph’s heart, I am thankful that he obediently humbled himself and allowed God to bring this about in him. I have seen many people resist God’s work of forgiveness in their lives, and the result is always bitterness. Sometimes it is a very evident, outwardly visible root of bitterness. Sometimes it is a hidden, pushed down, denied form of bitterness, and yet it still spills forth in the life of the unforgiving person.

The evidence of genuine forgiveness was displayed when Joseph was reunited with his brothers and he didn’t condemn them.  He wept and cried and assured them that what they meant for evil, God meant for good. He took care of them and re-established relationship with them.

When others have deeply hurt and betrayed us, may we find it in our hearts to forgive as God forgives, as God taught Joseph to forgive, and as Stephen forgave those who stoned him (Acts 6 and 7). Stephen’s story is compelling beyond words. With his dying breath, he forgave those who were taking his life.

Following the example of Joseph, Stephen, and Jesus Christ, may we hold no charge against our offenders and betrayers and toss their offense ‘as far as the east is from the west’ (Psalm 103:12). God wants us to give mercy to others as He has been merciful to us. He wants us to forgive as we have been forgiven.

Colossians 3:12b-13 teaches us to put on tender mercies, kindness, humility, meekness, long suffering; bearing with one another, and forgiving one another, if anyone has a complaint against another; even as Christ forgave you, so you also must do.

By Kathy Cheek
Used by Permission
From: First Breath of Morning: Where God Waits For You Every Day.

Comments: If you don’t see our response form, please go to https://thoughts-about-god.com/blog/kath-cheek_forgiven/