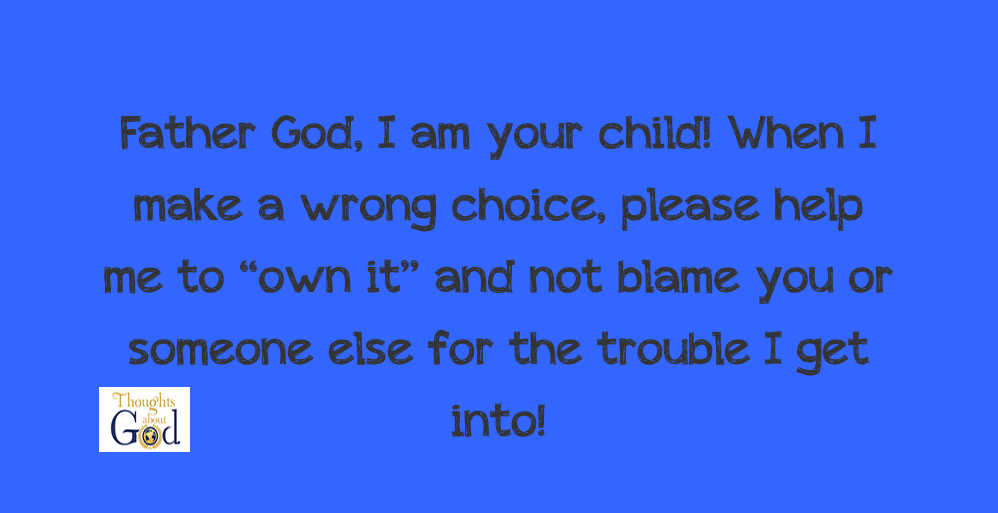 “Then the man said,

And the Lord God said to the woman,

“What is this you have done?”

“The serpent deceived me, and I ate.”

This is the blame game! Adam is blaming Eve, and Eve is blaming the serpent for deceiving her. What is not as evident is that God is also being blamed, because God gave Eve to Adam.

It’s interesting to note that in the creation story, Adam is so delighted to have Eve in his life. But now, when God is holding him accountable for his bad choice, he is only too happy to throw Eve “under the bus.”

Although from my point of view, the serpent truly was to blame, I find it interesting that God gives each of them (Adam, Eve and the serpent) their “punishment” for the bad choices they made.

As a parent, this story reminds me of when my children were young. They would be playing well together, but then a choice would be made by one of them that would cause a “domino effect” of bad choices, ending in a fight. Coming into the disagreement, I would ask what happened, and each child would blame another for the conflict. This is human nature, even from a young age!

Who is responsible for the choices that we make? Is it fair to blame God or someone else when we make wrong decisions, even if we felt pressured or influenced by another?

Spiritual maturity hopefully teaches us that we all make bad decisions, so when we do “give in to temptation,” we need to own those choices and not blame someone else for our unhappiness in the consequences that come as a result.

Father God, I am your child! When I make a wrong choice, please help me to “own it” and not blame you or someone else for the trouble I get into!

Today ask God to show you if you are blaming him, the devil, or your spouse today for any situation in which you find yourself. Release your defensiveness and pride, and let God restore you to a right relationship with him and those around you. Accept his loving discipline and learn from it.

By Karen Woodard
Used by Permission

•  Feelings, Forgiveness and Peace
•  What Do You Want Jesus to Say When you Meet Him Face to Face?