Skip to content
Home > Thoughts by Men > The Shepherd’s Voice 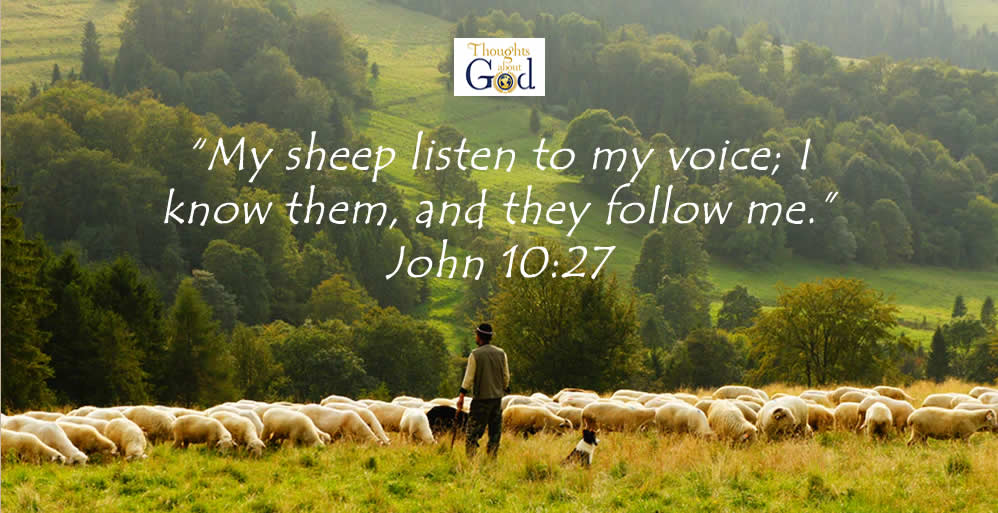 President George W. Bush commented that if you ever felt really special or powerful, try bossing someone else’s dog around. Unless you are his master, that dog could care less how powerful you are.

In this verse, (John 10:27) Jesus is comparing those who follow Him as the Son of God with the sheep who follows the shepherd. The shepherd knows his sheep. Jesus says, “I know My sheep, and am known by My own.”

Both the Shepherd and the sheep are aware of this, and it enables the Shepherd to lead His sheep in the best possible way, helping them to learn what He teaches and to do what He commands.

Being known by and knowing the Shepherd implies that, not only do they know His voice, but they have an intimate understanding of the way He thinks and are inclined to reflect His way of doing things. Their imitation of the Shepherd becomes automatic because the sheep anticipate his will. They become one with the Shepherd.

Sheep need to be led. Unlike other animals, sheep rarely find their own way safely. Since sheep go astray, their guidance and safety lies in the Shepherd’s leadership A thief, a robber, or a stranger may call the sheep by name and try to imitate their Shepherd’s voice, but through long usage and intimacy, they can discern a strange voice and become alarmed.

With a large number of sheep, the true Shepherd may shelter them in many pens, but they are still all His sheep and all one flock. The flock does not create this unity, but because the nature of the sheep is in harmony with their Shepherd, and because their relationship to Him is intimate, they recognize and obey His voice.

As Christians, Jesus is our shepherd and we are his sheep. In a world competing with many voices, we should listen for His voice alone and follow Him wherever He leads, guides, protects us and where He gave His life for our eternal salvation.