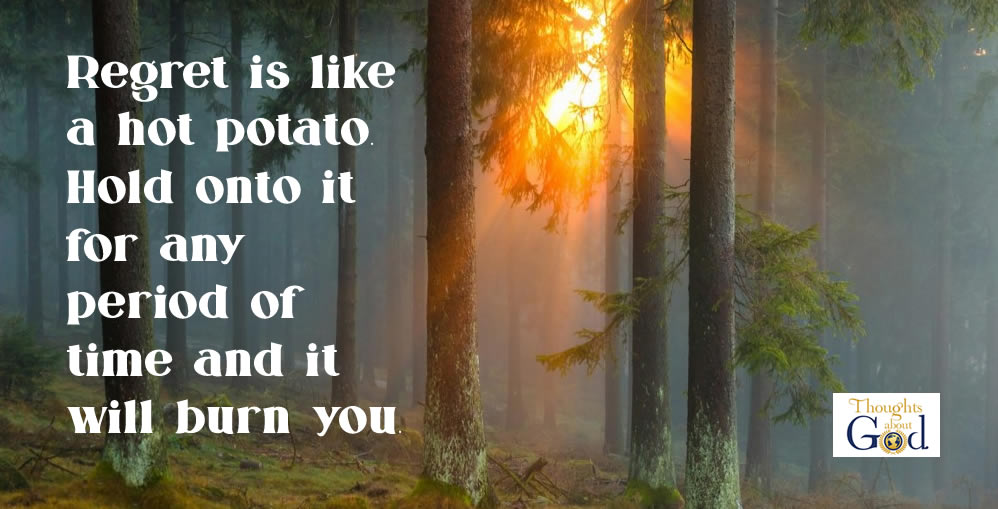 The Dark and Lonely Closet of Regret

When you begin to step out into your dynamic future,  regret becomes something tied to your static past that no longer serves a purpose. Regret, like guilt, is useful only as a passageway to something better. Regret is good in that it gets us to agree with God over what we have done wrong, but it needs to quickly be eclipsed by God’s forgiveness and hope, counting on the new creation that we are in Christ. You regret something only long enough to change. Any longer and it becomes a bondage to one’s past.

Regret is like a hot potato. Hold onto it for any period of time and it will burn you.

Regret can lock you up in the “would have,” “could have” and “should have’s” of life that lead only to a futile rehearsal of our past mistakes with no hope of change. “If only I had or hadn’t done such and such...” Holding onto regret is like turning a key on the closet of isolation, from the inside, that keeps us locked up in darkness and separation. In a twisted sort of way, we like it in that closet, because then we do not have to engage in the life around us. We can selfishly stay, focused on ourselves, drawing all the attention and licking our wounds – wounds that God wants to heal, if we would just stop tearing at them.

Regret nullifies our possibility for change. It says we would rather feel bad about what we did than to learn from it and move on. Regret says that we want to pay for our own sins rather than accept God’s forgiveness. Regret crucifies Christ over and over again when He only died once and for all. Remember? “It is finished.” Regret says, “No it’s not. I have to pay for this first.” And then it’s never over.

Regret basically leaves God out of the picture. It denies the miracle of forgiveness and the hope of change. It says we have only our poor, sinful, dysfunctional selves to deal with.

Stepping out is scary, and there are lots of options to choose from, but that is where the Spirit is. Leave your regrets to the past because they are tethered there and will not accompany you out into the Spirit. The Spirit of God doesn’t like closets, especially dark ones.

“Therefore if anyone is in Christ, he is a new creature; the old things passed away; behold, new things have come” (2 Corinthians 5:17).

What is there to regret about that?

By John Fischer
Used by Permission