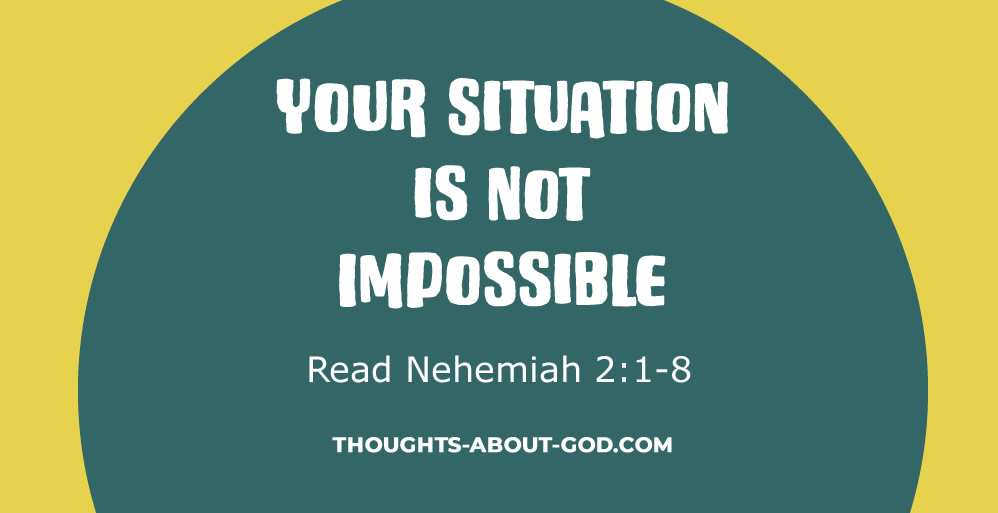 The Lord can take an impossible situation—no matter what it is—and move in ways mightier than you can imagine.

Discouragement can rob peace, joy, and contentment. But I have great news if you feel disheartened: You’re not stuck!

I’ve known people who appeared to be in an impossible situation. A few years later, however, they were in a terrific place, either in terms of their circumstances or their emotions. The reason? They never gave up. Instead of sulking in self-pity, they chose to believe God, step out in faith, and climb out of the emotional pit.

Nehemiah is a good example. He had every reason to feel defeated, because his people were in trouble. After receiving news that the city wall had been destroyed, this man of God acknowledged profound disappointment and grieved. Though pain flooded his soul, he didn’t allow himself to stay in that low place. Instead, Nehemiah cried out to God, seeking direction.

Sadness in the presence of royalty was punishable by death. But the Lord answered Nehemiah’s prayer with amazing power, prompting the king to notice his servant’s sad countenance and then to ask what he could do to help. This miracle led to the rebuilding of the wall and the redemption of God’s people.

The Lord can take an impossible situation—no matter what it is—and move in ways mightier than you can imagine.

Do you live in eager expectation of what the Lord will do? Or have you chosen to linger in the depths of despair? Like Nehemiah, turn your disappointment into a petition for God’s help. He can restore your hope and prevent negative emotions from gaining a stranglehold on your life.

Nehemiah 2:1-8 – And it came to pass in the month of Nisan, in the twentieth year of King Artaxerxes, when wine was before him, that I took the wine and gave it to the king. Now I had never been sad in his presence before.  Therefore the king said to me, “Why is your face sad, since you are not sick? This is nothing but sorrow of heart.”
So I became dreadfully afraid, and said to the king, “May the king live forever! Why should my face not be sad, when the city, the place of my fathers’ tombs, lies waste, and its gates are burned with fire?”  Then the king said to me, “What do you request?” So I prayed to the God of heaven.  And I said to the king, “If it pleases the king, and if your servant has found favor in your sight, I ask that you send me to Judah, to the city of my fathers’ tombs, that I may rebuild it.”  Then the king said to me (the queen also sitting beside him), “How long will your journey be? And when will you return?” So it pleased the king to send me; and I set him a time.  Furthermore I said to the king, “If it pleases the king, let letters be given to me for the governors of the region beyond ]the River, that they must permit me to pass through till I come to Judah,  and a letter to Asaph the keeper of the king’s forest, that he must give me timber to make beams for the gates of the citadel which pertains to the temple, for the city wall, and for the house that I will occupy.” And the king granted them to me according to the good hand of my God upon me.

•  God is Bigger than all my Problems