Skip to content
Home > Thoughts by Men > Moments of Weakness 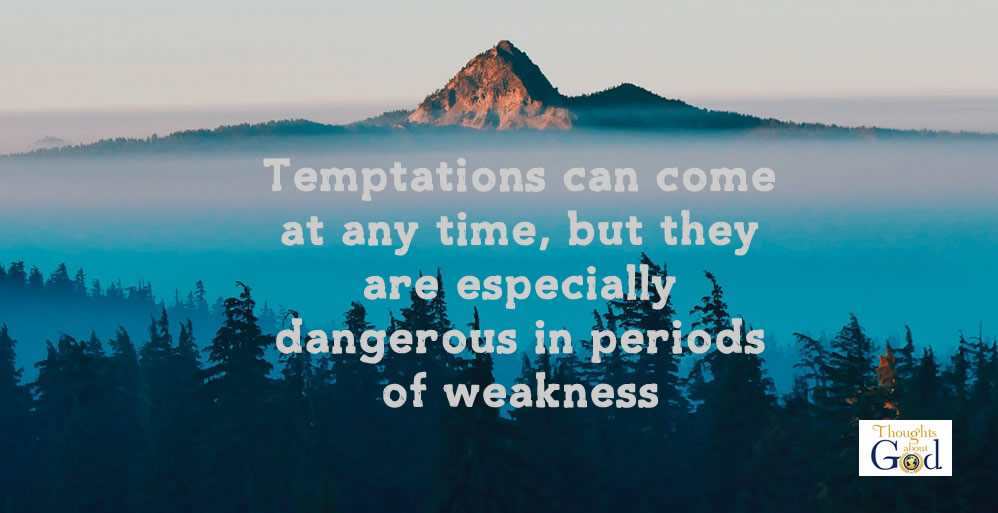 “Then it happened in the spring, at the time when kings go out to battle, that David sent Joab and his servants with him and all Israel, and they destroyed the sons of Ammon and besieged Rabbah. But David stayed at Jerusalem.2 Now when evening came David arose from his bed and walked around on the roof of the king’s house, and from the roof he saw a woman bathing; and the woman was very beautiful in appearance. 3 So David sent and inquired about the woman. And one said, Is this not Bathsheba, the daughter of Eliam, the wife of Uriah the Hittite?” 4 David sent messengers and took her, and when she came to him, he lay with her; and when she had purified herself from her uncleanness, she returned to her house. 5 The woman conceived; and she sent and told David, and said, I am pregnant.”

Temptations can come at any time, but they are especially dangerous in periods of weakness because that’s when we’re more prone to yield. The Scriptures are filled with descriptions of men and women who sinned against the Lord in moments of vulnerability. These true stories are given to us for our instruction so we can learn from the mistakes of others. ( 1 Corinthians 10:11).

While temptations come in a variety of forms, they follow a similar pattern. David’s sin is a good example of this. His eye looked, his mind desired, and his will acted. Resistance is difficult in the best of times, but it’s even more of a struggle during periods of anger, emptiness, idleness, or isolation—and that was the case for David, who should have been in battle instead of in Jerusalem (2 Samuel 11:1). At the end of the day, no matter what’s creating the vulnerability, each person is responsible for his or her own actions.

In times of weakness, remember the acronym “HALT.” Don’t let yourself become too hungry, angry, lonely, or tired. Most importantly, fix your attention on the Lord and draw strength from Him through prayer. Use Scripture to guard your mind, and the Lord will give you victory over temptation.