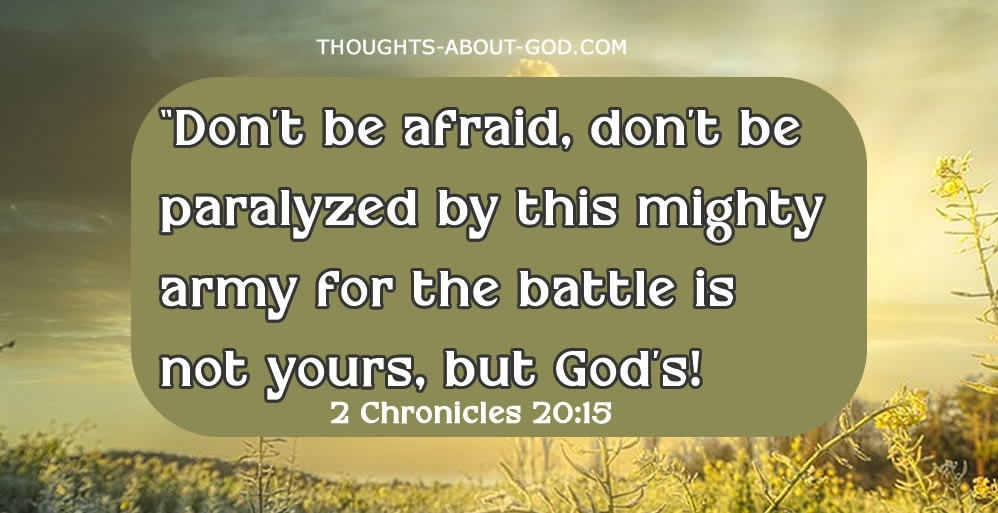 One of the greatest lessons I have ever learned about the Christian life is the importance of praise and thanksgiving.

“And at the moment they began to sing and to praise, the Lord caused the armies of Ammon, Moab, and Mount Seir to begin fighting among themselves, and they destroyed each other!” 2 Chronicles 20:22

The armies of Ammon, Moab and Mount Seir had declared war on King Jehoshaphat and the people of Judah. So Jehoshaphat called the people together and prayed, “Oh, our God. Won’t you stop them. We have no way to protect ourselves against this mighty army. We don’t know what to do but we are looking to You.”

Then the Lord instructed the people, “Don’t be afraid, don’t be paralyzed by this mighty army for the battle is not yours, but God’s! Tomorrow, go down and attack them!…But you will not need to fight. Take your places; stand quietly and see the incredible rescue operation God will perform for you” (2 Chronicles 20:15-17).

After consultation with the leaders of the people, Jehoshaphat determined that there should be a choir, clothed in sanctified garments and singing the song, “His Loving Kindness Is Forever,” leading the march. As they walked along praising and thanking the Lord, He released His mighty power in their behalf.

One of the greatest lessons I have ever learned about the Christian life is the importance of praise and thanksgiving. The greater the problem, the more difficult the circumstances, the greater the crisis, the more important it is to praise God at all times, to worship Him for who He is; for His attributes of sovereignty, love, grace, power, wisdom and might; for the certainty that He will fight for us, that He will demonstrate His supernatural resources in our behalf.

As in the case of Jehoshaphat and the people of Judah when they began to praise God and He caused the three opposing armies to fight against each other and destroy one another, God will fight for us if we trust and obey Him. There is no better way to demonstrate faith and obedience than to praise Him and to thank Him, even when our world is crumbling around us and the enemy is threatening to destroy. God honors praise. Hebrews 13:15 reminds us, “With Jesus’ help, we will continually offer our sacrifice of praise to God by telling others of the glory of His name.”

Lord, I will continue to praise You and give thanks to You for who You are. When difficulties arise, I will praise You all the more and thank You for Your faithfulness. I will depend upon Your supernatural resources which enable me to live the supernatural life, regardless of the circumstances. Amen.

•  I am Thanking You right NOW