Skip to content
Home > Thoughts by Women > Set in Stone 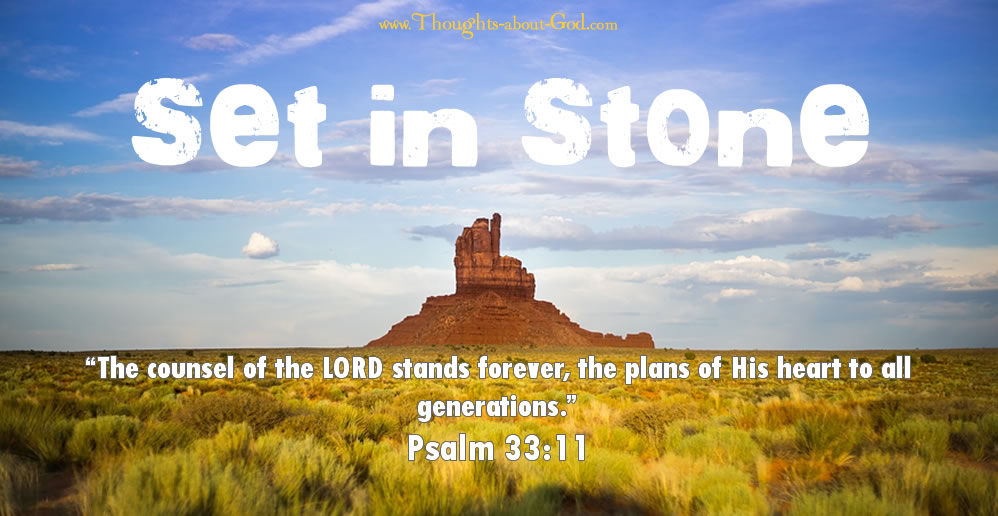 “The counsel of the LORD stands forever, the plans of His heart to all generations.” Psalm 33:11 (NKJV)

Have you ever used this reply when asked about your future plans, “Well, nothing’s set in stone.”  This is the equivalent of saying, “Not yet. But I have some ideas.”  Or “I’ve started to make arrangements, but there’s still a lot to do.”  This statement could even mean, “I’ve made some plans, but we’ll see what happens.” We can formulate our intentions and have a strategy, but to “set them in stone” is another story.

Often, plans being formulated by those in authority are troublesome. Some proposals aren’t set in stone. But they are being devised, and it seems they are headed for stone.  Our thoughts can be overwhelmed by the upsetting news reports.  But turned to the rightful Ruler of the universe, we can find this comfort: “The LORD brings the counsel of the nations to nothing; He makes the plans of the peoples of no effect.” (Psalm 33:10)

For centuries, man has laid down counsels. He has mapped out intentions.  Some propositions he would have called, “set in stone.” But history confirms that, though plans are devised and carried out, eventually they are brought to nothing. New counsels form. But they also come and go, are worked out and defeated. In fact, every nation that has ever existed has been involved in this same cycle: plans devised, carried out, eventually foiled.

If the Lord thwarts the plans of nations, defeats counsels, sets up new governments, and puts down others, what about His own intentions? “The counsel of the LORD stands forever, the plans of His heart to all generations.” (Psalm 33:11)  When God made His plans, He set them in stone. And that is where they have been for centuries.


Comments: If you don’t see our response form, please go to https://thoughts-about-god.com/blog/bethany-hayes_set-stone/